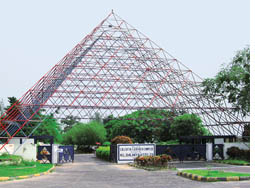 Until a decade ago, Kim Li Loi, Canton and Hot Wok, restaurants in the Chinatown locality of eastern Kolkata's Tangra district, collectively served as a tannery among scores of others run by Chinese immigrants. But a December 19, 1996, Supreme Court order directed these and other inner city tanners from Tiljala, Topsia and Pagla Danga districts to shut shop and relocate to the Bantala Leather Complex, 15 km away from Kolkata.

"As of July 2007, 433 of the 550 tanners have been allocated land at the complex 125 tanners have started operations,' says Mausumi Guha Roy, special officer on duty, Directorate of Industries, Kolkata. "The rest have either shut shop or failed to relocate to the complex,' says Qammrul Hassan, manager, Kolkata Leather Complex Tannery Association.

There are disagreements galore over land and financial issues governing the complex. Tanners who haven't relocated say infrastructure is inadequate and fragmentary, compared to the original agreement. They therefore continue to operate in the inner city areas, in violation of the court order.
From Kanpur to Kolkata The order to formalise the leather sector in Kolkata is linked to M C Mehta v Union of India, Writ Petition (Civil) No 3727 of 1985, which was initially

directed against tanneries in Kanpur. The scope of the petition was thereafter enlarged to call upon industries located on the banks of the Ganga to stop discharging untreated effluent into it. According to a 1995 report of the National Environmental Engineering Research Institute, presence of chrome-based tanning among Kolkata tanners, with inappropriate wastewater drainage and collection systems, was causing serious environmental, health and hygiene problems. The report indicated that the highly congested habitations offered little or no scope for future expansion, modernisation or installation of effluent treatment plants.

With imminent signs of their businesses being thwarted, the tannery association filed a review petition highlighting what they claimed to be an