A law that lacks depth 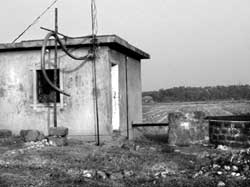 in its apparent haste to avoid public debate, the Goa government pushed through its groundwater law recently. Now, doubts have arisen about how effectively the regulation would plug prevalent problems such as rampant commercial exploitation and inequitable distribution of water.

The state's villagers have for some time now been complaining of large-scale groundwater extraction and sale by a new breed of water merchants, especially in areas which lie just off the beach belt and urban centres. The water is channelled and sold for a pittance to hotels, the manufacturing and construction sectors as well as urban housing societies. In the process, the rural groundwater level is getting depleted and villagers' wells drying up.

Not only are village wells affected by this phenomenon, the state government is unable to provide adequate tap water to many parts of the state. Though the authorities may well be aware of the loopholes in the new law, they can do little to provide sustainable water solutions to industrial estates built on barren hilltops, water-guzzling tourism enterprises and housing societies in areas where groundwater level is low.

The following are some of the questionable clauses in the bill passed during the five-day Goa assembly session in January 2002:
 Groundwater totalling more than 30,000 litres in a year cannot be transported out of any well. But this provision can be overruled if permission is obtained from a government official

 Sweeping powers have been vested in the ground water officer (gwo)