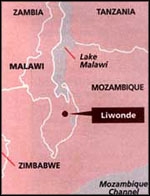 In a continent reeling under the ever increasing burden Of AIDS, there is an expanding tribe of quacks and healers offering magic potions and easy cure for the disease. Thousands Of AIDS patients in Malawi have been thronging to one such healer who offers his cure - a rust- coloured liquid - free of charge. The 79 year-old Chisupe's work demonstrates how a quack cure Results in a medical disaster when people abandon their faith in scientific medical advice. According to health officials, years of efforts educating Malawians about AIDS have been undone. People who take the potion not only believe that it is a cure, but also a -vaccine against AIDS. They have consequently stopped taking preventive action against the disease.

Officials are worried that this episode could lead to a record number Of AIDS cases five years from now. The so-called cure had generated such a frenzy that the government and the Red Cross had to provide tents, fresh water and sanitation facilities for those camping in Chisupe's compound in Liwonde. Those who take the potion realise their mistake when it is too late. Malawi has one of Africa's highest rates Of AIDS and it is the rich and the educated who have the highest incidence of the disease. Some of the businesses are losing 10 to 20 per cent of their work force each year.