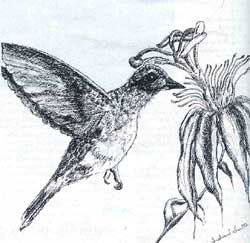 SOME PLANTS produce two types of flowers - starninate (males) and bisexual. Scientists thought the role of starninate flowers was more to attract agents of pollination than to donate pollen. But new research shows that while larger floral displays attract more pollinators, staminate flowers are more effective in the dispersal of pollen than bisexual ones. Experiments conducted by Robert D. Podolsky of the University of Florida in Gainesville showed the receipt of pollen by flowers increased when starninate flowers were used to enlarge floral displays (Science, Vol 258, No 5083).

Hummingbird-pollinated Besleria triflora plants produce both staminate and bisexual flowers. The staminate flowers disperse substantially less pollen than the bisexual ones and also position their stigma and anthers away from pollinators formuch of their life. This was what had led scientists to believe that staminate flowers are produced mainly for pollinator attraction than for pollen donation.

In the laboratory, Podolsky tried another experiment to check the differences in pollen receipt between the displays. Using temporarily captive hummingbirds, he compared the effects of their intervening visits to staminate flowers as against their visits to bisexual ones on pollen receipt by subsequent flowers. Pollen delivery was greater when the intervening flowers were staminate. He also found that intervening visits by pollinators to staminate flowers did not dilute the amount of pollen transfer to flowers.

Because flowers on a plant have limited pollen supply, plants displaying both types of flowers would benefit from more frequent pollen delivery and increased amounts of pollen per flower. If only bisexual flowers were produced, it would increase the number of flowers but lower the amounts of pollen received by each flower.