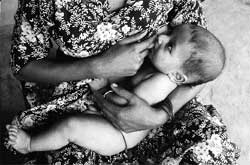 studies show that calcium intake does not help prevent bone loss in lactating women. At present, doctors prescribe calcium doses for such women to prevent loss of bone density. Heidi J Kalkwarf and his colleagues at the Children Hospital Medical Center, Cincinnati, usa , have found that calcium intake of less than 800 mg per day does not have any positive effect on the health of such women. They reached the conclusion after examining 97 lactating women and 99 normal women for nearly six months.

Recently, a group of researchers had suggested that calcium supplements are not effective in preventing pre-eclampsia. It is a metabolic disorder of pregnancy due to spread of bacteria and other toxins in the body. Richard Levine and his team at the National Institute of Child Health and Human Development, Bethesda, usa, randomly assigned 4,589 healthy pregnant women to take either two grams of chewable calcium tablets or placebos. They found that over seven per cent of the women taking calcium supplements suffered pre-eclampsia (New England Journal of Medicine , Vol 337, No 3 & 8).

The findings showed that calcium intake by pregnant women does not prevent pre-eclampsia, pregnancy-associated hypertension and miscarriages or deformities at birth. Pre-eclampsia affects about five per cent pregnant women worldwide and may be fatal for mothers as well as children.

Lactating women lose some of their bone density, especially of skeletal regions. During three to six months of lactation, the bone mineral density is reduced by 3-5 per cent at the lumbar spine and femoral neck region, and about 1-2 per cent in the whole body.

When the breast-feeding is stopped, the loss of calcium in bones is reversed. The changes are apparent in women who get pregnant during lactation. Bone loss has only been linked with lactation because it does not occur in mothers who do not breast feed their babies.

The loss of bone mineral density is found to be highly variable from a loss of nine per cent to a gain of two per cent. Similarly, the calcium concentration in breast milk as well as the calcium passed to the baby during lactation also varies in women. There is no evidence that consumption of calcium influences either calcium concentration in breast milk or the overall bone mineral density of lactating mothers. Lactation-induced bone loss has been noticed even in women taking more than 1,600 mg of calcium per day.

When some lactating women in Gambia taking a very low calcium intake of about 280 mg per day were given a calcium supplement of about 700 mg per day for 12 months, the researchers did not find any major effect of calcium content on breast milk and bone mineral density. They could only notice urinary excretion of calcium.

In a similar study, when an American woman was supplemented with moderate to high calcium of about 1,300 mg per day, it did not have any effect on bone mineral density even after three months of lactation. Data collected by the Kalkwarf's group in lactating and non-lactating mothers support these conclusions.