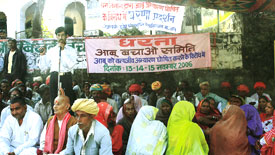 mount Abu, in Sirohi district, Rajasthan was shut down from November 13 to 15. This was after the state's wildlife department issued a notification on October 4, 2006 declaring the area a wildlife sanctuary. Protests were held at the sub-divisional magistrate's office. About 11,000 tourists were asked to leave town. By the final day, the effects of the bandh were being felt in political circles, and the Rajasthan chief minister called a meeting with leaders of the agitating groups.

The order could give the department complete control over the town and the surrounding villages. It could also affect commercial tourism in this hill town. With close to two million visitors a year, traders and hoteliers could be severely affected. Not surprisingly, these two groups called for the bandh.

In 1997, the department had issued a similar notification, which resulted in a day-long bandh , after which the issue died down. Now, after nine years, traders are accusing the wildlife department of eyeing tourism revenue. At present, the municipal corporation gives 30 per cent of its earnings to the wildlife department. These include tariffs charged for vehicles entering Mount Abu and revenues from the Nakki lake (about Rs 1.5 crore per year).

The notification has citizens worried. It requires them to furnish details of their property with an assessment of its present market value. This could be the first step in losing control over their property.

Citizens have responded by forming the Abu Bachao Samiti, a group of traders and lawyers who are now filing objections to this self-asessment, which they plan to submit to the sub-divisional magistrate by the end of November. The filing of objections is done on an individual basis and local lawyers are offering their services free of charge. Villagers from surrounding areas were invited to join the campaign and by November 15, 2006, 1800 objection forms had been filed. Villagers are also worried because they collect firewood and graze cattle in the forest.

The sanctuary is spread over an area of 328 sq km and is an ecological island. With human settlements surrounding the base of the hill, there is no corridor for the movement of animals. In 1960, the state government had issued a notification declaring hunting to be unlawful in the reserve area. After the Wildlife Protection Act of 1972, it was decided that all previous notifications pertaining to wildlife should be absorbed in the relevant sections of the new act. This is when the administration decided to declare Mt Abu a sanctuary, even though the original notification did not mention this and sought only to prohibit hunting. From time to time, the wildlife department has tried to assert its rights over the area but the issue inevitably gets deferred.

The present environment is highly polarised, with residents on one side and the wildlife department on the other. According to Vijay Singh, a farmer from Oriya, a neighbouring village, "The wildlife department is useless. They are only creating problems. We have lived on this land for centuries and know how to take care of our forests'.

Kiran Chowda, a local environmentalist, feels that the department can play a constructive role, rather than passing draconian laws. Poaching is on the rise and they could control this. Besides, with several hotels using traditional wood-fired boilers to heat water, the surrounding forest areas are suffering. Promoting alternative technologies is an area where the government can help.

Between 1991 and 2001, the population of Mount Abu has more than doubled and today stands at 25,000. This is straining ecological resources and the immigrants influx needs to be checked.

Incidentally, there is no precedent in India of an urban area being declared a sanctuary and this order if carried out would be the first of its kind.