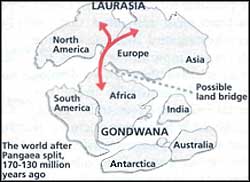 For creatures that were supposed to have dominated the entire planet, dinosaur fossils have been singularly missing from Africa. But now palaeontologist Paul Sereno from the University of Chicago claims that he has disinterred from Algeria and Niger fossils of several dinosaur species, among them 2 previously unknown -- a carnivore and a herbivore that lived almost 130 million years ago (Science Vol 266, Vol 5183).

The find is upending accepted ideas about the relationship among the dinosaurs about 150 million years ago, when the supercontinent of Pangaea was breaking up. Sereno's find points to a closer link between African and North American dinosaurs than assumed. This, he feels, indicates that Africa maintained a connection with the north far longer than believed.