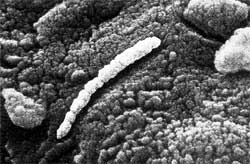 the possibility of life on Mars has been given a jolt by two new analyses, one published in Geochimica et Cosmochimica Acta and the other accepted for publication by the same journal. This could well end claims made by nasa scientist David McKay and his team in August 1996, of the existence of Martian life. Evidence to Martian life centres around the meteorite alh 84001, which chipped off the surface of Mars some 15 million years ago and landed in the Allan Hills region of Antarctica about 13,000 years ago.

Inside the fissures in the meteorite are carbonate globules containing tiny tubular structures that look like fossilised bacteria, crystals of magnetite and iron sulphide that are similar to those produced by some terrestrial bacteria, and polycyclic aromatic hydrocarbons (pahs)