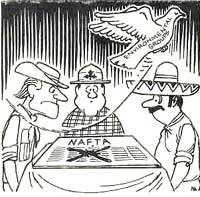 THE PROPOSED North American Free Trade Agreement (NAFTA) between the US, Canada and Mexico was dealt a stiff blow by a court judgement requiring the US government to file an environmental impact statement on the effects of the accord, before it comes into force on January 1, 1994.

The suit seeking the environmental impact report was filed by three groups -- Public Citizen, the Sierra Club, and Friends of the Earth. They fear damage to land, water and air from production facilities near the border inside Mexico. NAFTA critics argue US and Canadian companies will be attracted to Mexico to take advantage of the ineffective environmental regulations in that country.

US federal judge Charles Richey said the pact "will have significant environmental effects" and that it violated the national environmental policy act.

Treasury secretary Lloyd Bentsen said the administration will appeal the ruling as "it violates the president's authority to carry on foreign relations for our country". If upheld, Richey's ruling could be applied to the Uruguay Round of trade negotiations. A successful legal challenge to NAFTA would embolden US environmentalists to file a similar lawsuit covering the General Agreement on Tariffs and Trade.