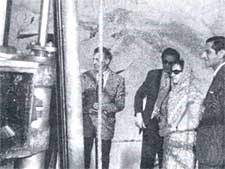 Speculation about the future of the Nuclear Non-Proliferation Treaty (npt) came to a suffocating halt as the Review and Extension Conference on the treaty concluded in New York on May 12.

In a repeat show of power, the 5 nuclear bosses -- the us, Russia, the uk, France and China -- and their allies achieved their goal of indefinitely and unconditionally extending the npt. While this was almost inevitable, what came as a surprise was the consensus in support of the treaty (which has 178 signatory nations as members), by a majority vote.

Throughout the conference the nuclear have-nots put up a dogged resistance to the moves of the nuclear weapon states and their allies to push through an indefinite and unconditional extension (see Down To Earth, Vol 4, No 1). The 5th nuclear weapon state, China, had also offered a choice of a 25-year extension. Towards the end, however, sustained tactics, including armtwisting and aid-blackmailing by the nuclear states, won the day.

Minor concessions were offered to Indonesia, Malaysia, Iran, Mexico, Egypt and Nigeria. There were some voices of dissent: an annual review meeting instead of the earlier quinquennial one to assess the progress towards nuclear disarmament, and a comprehensive test ban treaty (cbct), to be ready by the next year. If the cbct ever comes into existence, it will not be meaningful unless India, Pakistan and Israel, which are capable of producing nuclear weapons, sign it.

India, a non-signatory to the npt, wisely chose to stay away from the conference even in the capacity of an observer. The Indian position on the npt -- like that of other developing nations -- is that it perpetuates the nuclear hegemony of the nuclear powers at the cost of nuclear have-nots. The failure to implement Article 6 of the treaty, which calls for moves towards greater disarmament, evokes particularly strident reactions.

Says an Indian government official, "The npt has not struck a balance in terms of obligations of nuclear weapon and non-nuclear weapon states. While the latter are expected to commit themselves not to build weapons, nuclear weapon states have made few serious attempts at disarmament." Added Jasjit Singh, Director of the Indian Institute for Defence Studies and Analyses, "the npt is even more irrelevant than before", as the members of the treaty have shown that "they are not serious about disarmament".

For the nuclear haves, this indefinite extension has led to jubilation. Platitudes were voiced by the leading nuclear states on how the extension would guarantee against the threat of a nuclear war, provide for international stability and promote nuclear disarmament. The us Assistant Secretary of State, Thomas E McNamara even expressed his "sincere desire" to see that both India and Pakistan become party to the treaty which could establish a secure political and military situation in the subcontinent.

This view did not find favour with the dissenters. They opine that far from promoting non-proliferation, it would make the treaty less flexible. That is because the only recourse for countries dissatisfied with the npt would be to leave the treaty. Once outside its ambit, they could well try becoming nuclear weapon states.

Frank Barnaby, former director of the Stockholm International Peace Research Institute felt that the results of the conference only "legitimises the possession of nuclear weapons indefinitely and perpetuates the distinction between those who possess nuclear weapons and those who do not".

The npt's past record makes an indefinite extension anathema to the non-aligned nations. The 25-year review in April this year has exerted pressure on the nuclear states to work out agreements about substantial cuts in warheads and start serious negotiations about a ban on all nuclear tests. For the non-aligned countries, a limited extension of the treaty and another review conference makes better sense because it keeps up the heat on nuclear weapon countries to improve their disarmament record.

The conference also displayed the lack of unity among the non-aligned nations. A prominent Asian delegate summed up the situation thus: "There is a single non-aligned movement position on the way to approach the treaty in its totality, but there is no single position on how to vote." Efforts to undertake a vote on the extension fell by the wayside which paved the way for the unanimous adoption of the us-led plan of indefinitely extending the treaty.