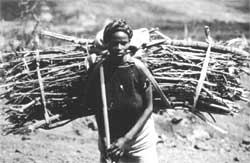 THE largescale destruction of west Africa's tropical forests by farmers has been projected as a well-known environmental scandal. But recently, two British scientists have turned the controversy on its head by suggesting that almost half of the tropical forests that are said to have been destroyed by logging and farming in the region, may never have existed.

After studying historical documents, aerial photographs, soil and vegetation and interviewing local people, researchers Melissa Leach of the Institute of Development Studies in Brighton and James Fairhead of Oxford University conclude that deforestation has almost certainly been exaggerated. They claim to have evidence suggesting that local communities using traditional farming methods have actually encouraged tree growth. In Ghana, for example, the established view is that much of the 8.2 million ha south and west of the Lake Volta were forested at the turn of the century. Only 1.8 million ha of protected forests remain. So, about 6.4 million ha have been destroyed by "inefficient agricultural practices (shifting cultivation) and over-exploitation', as a 1989 report to a uk government's aid agency put it.

The researchers admit that human activities including logging, expansion of farming and plantations and fires have indeed taken a toll. But they dispute the extent of forest cover in Ghana 100 years ago, as well as the nature of that forest and the claim that local farmers are to blame. They say the estimated official figures of forest cover 100 years ago seem to have been calculated by backward extrapolation of estimated rates of clearance for agriculture in the 1930s, combined with an assumption that much of what is regarded as the