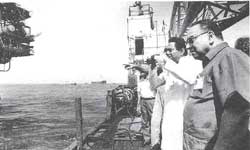 The Oil and Natural Gas Commission (ONGQ has given a detailed reply to the show-cause notice issued by the ministry of environment and forests (MEF), which alleged the ONGC had failed to prepare a detailed risk assessment study (RAS) and threatened to revoke ONGC's environmental clearance following the Bombay High-Uram pipeline rupture in May.

In its reply, ONGC contends the RAS was done at least two years before the environment ministry woke up to the need for such a report. While MEF demanded an RAS only in June 1990, when clearance was sought for the Neelam offshore project, ONGC had already commissioned Engineers India Limited and British consultant M K S Cromer and Warner for the purpose in 1988. The Council for Scientific and Industrial Research and a Dutch consultant, TNO, were also commissioned to do a RAS for the eastern basin.

The ONGC has stated in its reply that a detailed environment impact assessment had been submitted to the ministry as early as November 1990 for all but the Bassein, Heera and Ratna oilfields, the reports for which were submitted in September 1992.

However, ONGC's assertion that it had submitted contingency plans for blow outs, fires and oil spills to the. MEF as early as July 1989 raises a crucial issue: Was it actually the MEF that @vas caught napping by the spill?