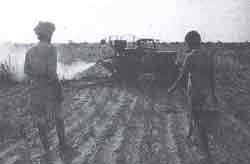 With tonnes of toxic chemicals being poured into the desert soil to kill locusts, experts warn of damage to the area's delicate ecosystem. The widespread use of banned organochlorine pesticides -- dieldrin in particular -- is expected to have serious ecological effects.

Officials counter, "We use a mild mixture of dieldrin (18%) and there is no cause for alarm." However, R S Mehertia of the Central Arid Zone Research Institute in Jaisalmer, says, "The effect of these pesticides will be manifest in the years to come."

Although no reports of cattle- or water-poisoning have been received, Mehertia points out, "The chemicals will have a long-term effect. They will enter the roots of fodder grass and kill desert animals, including natural enemies of locusts."

Western researchers debating the effectiveness of chemical treatment recommend that locust plagues be allowed to run their course. Chemical control operations do not seem to prevent an area from becoming heavily infested again.

According to a Panos dossier, Grasshoppers and Locusts -- Plague of the Sahel, pesticide use was responsible for an outbreak of unprecedented intensity in the Sahel in 1989. Mehertia concedes "pesticide damage to the ecosystem has to be balanced against the expected destruction by locusts."