Out for political mileage 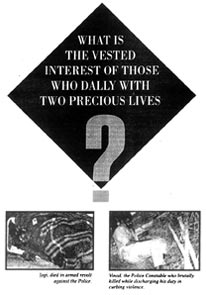 The recent events in the Wayanad Wildlife Sanctuary in northern Kerala (see: 'Stabbed in the back', March 15, 2003) has had an impact on the state government. Why else would it crank up its public relations machine to put a positive spin to a state-sponsored drive to evict tribals?

Witness the ad published in the March 7, 2003 New Delhi edition of The Indian Express. It pours scorn on "All those who shed crocodile tears in the name of the tribal people', thus reclaiming for itself the privilege and moral authority of representing their interests.

But let us remember the event that has sparked this ad off. In January, tribals belonging mostly to the Adivasi Gothra Maha Sabha invaded the Muthanga range and built settlements in the forest. In response, forest department officials aided by the Kerala Armed Police entered the forest in February to evict the "encroachers'. Clashes ensued in which a tribal and a policeman were killed.

The ad reminds us of this event. It shows a photograph of "Jogi, died in armed revolt against the police', unsubtly expanding the semiotic breadth of the term