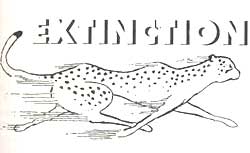 WITH ITS long, angular body, supple spine and cleat-like claws, the cheetah can chase down a car, speeding at over 115 km an hour. But its specialised aerodynamics are also precipitating its extinction.

Take, for example, Namibia, which has the world's largest cheetah population, but where the species has declined from around 5,000 in 1975 to a mere 2,500 today. Namibian farmers have played a large role in this process for they look on the cat as a threat to their livestock.

Daniel Kraus and his wife, Laurie Marker-Kraus, who have been studying cheetahs in Namibia for two years now, are promoting livestock management schemes that are gradually finding acceptance among the farmers.

The couple believe farms and not parks are the cheetah's best hope and today most of Namibia's cheetahs roam across huge cattle ranches, where game flourishes and where rival predators are scarce.