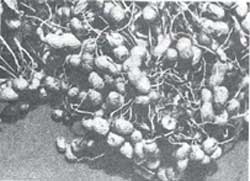 NOURISHING fodder, nutrition for the soil and brilliant yellow flowers from a plant that suppresses weeds and several pests. All this, for peanuts. Literally. Although the common peanut, Arachis hypogaea, remains a major source of oil and protein for most of the Third World, scientists are now promoting it as a nutritious forage for cattle.

Arachis, the genus to which the various species of groundnuts belong, is estimated to have some 100 wild species, of which more than 80 have been identified. According to experts, these wild species, which are endemic to Brazil, Bolivia and Paraguay, have a great unexplored potential that can be exploited to the advantage of people in the semi-arid tropics.

Well-established as a fodder crop in South America, groundnuts have only recently attracted the attention of researchers in other parts of the developing world for its forage. In the US and Australia, some 4,000 ha and 1,500 ha, respectively, have been planted with species of groundnuts. Most scientists are enthusiastic about its potential, says P C Kerridge, leader of the Tropical Forages Programme of the International Centre for Tropical Agriculture (CIAT), in Cali, Colombia.

Scientists have identified several wild species, such as A repens and A glabrata, which they hope to exploit as forage crops. These wild species produce significant volumes of green forage, which withstand grazing and trampling by cattle, competition from aggressive weeds and grasses and drought and flood conditions.

Healthy legumes
They are also fairly resistant to several pests and diseases. A pintoi for one, scientists believe, comes close to an ideal pasture legume because it is capable of regenerating from seeds, root fragments, and stems. Both and A glabrata thrive on poor soils. Being a legume, groundnuts are efficient at fixing atmospheric nitrogen to meet their requirements.

Apart from the crop's low requirement of nutrients and its ability to withstand adverse climatic conditions, studies have revealed that cattle fed on groundnuts and grass pastures registered a 17-20 per cent increase in their milk yields, compared to cattle fed on grass alone, says C E Lascano, a ruminant nutritionist at CIAT. Increases in body weight ranging between 20 and 200 per cent were also observed, when cattle were fed groundnut forage.

However, despite its enormous potential, most farmers are little aware of the benefits of groundnuts foliage. Also, the high cost of seeds -- ranging from $15 to $30 per kg -- deters them. Kerridge says that to make groundnuts more acceptable to farmers, the cost of its seeds must be reduced.