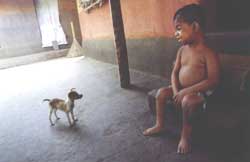 WHEN too many words clamour with each other and obfuscate the contours of a discourse, images perhaps remain the lone source of strength for people.

Recovering this primal force of images, photographer Madhuraj of Mathrubhumi daily and Bhagyanathan, an artist in Kannur, have brought together many images from the land of the 'Children of Endosulphan' in Kasaragod district. Titled 'For a poison-free earth', the exhibition showcases poignant pictures from Kasaragod where the Plantation Corporation of Kerala (PCK) had rained toxic pesticides for over three decades, wrecking human and environmental health.

The exhibition begins with the image of a sturdy hand pointing rather accusingly at a vast stretch of innocuous greenery with the patches of cashew plantations, which the PCK had turned into 'killing fields'.

From a helicopter hovering over the landscape and a collage of denatured human beings to the helpless children of 'Endosulphan', the images portray human war over nature and humanity. Like those of lively Sruti with her cleft feet; Sainaba who succumbed to Hydrocephalous, Narayana Naik with stunted growth-boys and girls with several severe diseases. All these children have been juxtaposed in the exhibition with images of the indomitable richness of nature and the courage of those who dared to stand up and fight for an unpolluted life.

While Madhuraj's photographs vividly sketch the aftermath of the aerial spraying of Endosulphan in the villages in Kasaragod, Bhagyanathan's paintings explore the ethical questions implied in the tragedy.

The images in the photo and painting exhibition are supported with brief captions on the situation in Kasaragod with facts on the pesticide overkill practiced globally in the name of development and justified in the name of science.

Dedicated to the memory of Anil Agarwal, the exhibition has been arranged with the support of the Society for Environment Education, Kerala (SEEK) based at Kannur.