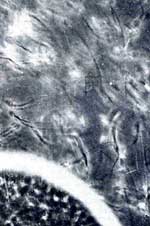 THE VILLAGE midwife's claims have been substantiated by recent scientific research on the contraceptive qualities of neem. "The ancient Ayurvedic treatises indicate neem was used to induce abortions," says M R Unniyal, assistant director at the Central Council for Research in Ayurveda and Siddha in Delhi.

Today, scientists at the Defense Institute of Physiology and Allied Sciences (DIPAS) and at the National Institute of Immunology (NII), both in Delhi, have independently found that neem oil constituents not only reduce fertility but also prevent implantation of the embryo.

Studies into neem oil's contraceptive potential began in the early 1980s and at DIPAS, veterinarian S S Riar and his team discovered vaginal application of neem oil before sexual intercourse destroys sperm as they die within 30 seconds of mixing with neem oil". Trials on rabbits and rats and on some defence volunteers have yielded encouraging results on using neem oil as a spermicide.

The volatile fraction of the oil called NIM 76, not only provides neem's typical odour, but also has a spermicidal effect, DIPAS researchers report in the Indian Journal of Medical Research. According to them, NIM 76 can even prevent a fertilised egg from being implanted on the uterus wall. Minimum neem oil doses required are small and the test animals regained their fertility about one month after application was stopped.

Riar's neem extract is reversible after a month and requires regular daily application, but Shakti Upadhyay and his colleagues at the National Institute of Immunology (NII) have found a single application of the neem oil extract in the uterus of a rat can block fertility for several months. Infertility ends once the effects of the extract have worn off and experimental rats and monkeys have conceived and given birth to normal offsprings.

A purified fraction called Praneem, made by NII, will be used soon in human trials. NII researchers say the neem extract does not have a direct spermicidal effect, but instead probably induces the body's immune system to react to sperm and destroy it. As the rejection doesn't usually occur in the uterus, NII researchers say the neem extract must release the usually suppressed immune response of the uterus to sperm. Embryos that have not been implanted are also aborted when exposed to neem extracts.

Another team of scientists working at the Government Medical College in the department of pharmacology in Aurangabad have found that a water extract of freshly crushed neem leaves fed daily to male rats is an excellent contraceptive. After about 11 weeks the rats became completely infertile; but the condition was reversible after four to six weeks and the rat's sperm-producing ability and sexual drive were found to be unaffected, though the mobility of the sperm was reduced substantially. While eating neem proved harmless to rats, several guinea pigs and rabbits died during the experiment.

Safe contraception is essential in India both to liberate women from unwanted pregnancies and to straighten the escalating population curve. The lowly neem tree may thus prove a godsend for both men and women.