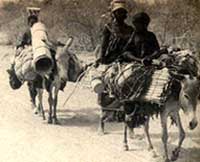 IF THERE was one thing that African leaders wanted out of Rio, it was a convention on desertification. And finally they got it. The 47th general assembly has now been asked to set up an intergovernmental negotiating committee for the convention.

The jubilant Africans, however, had numerous tense moments with the United States and the European Community (EC) changing positions on the issue of a desertification convention. At one point, James Nadjie of Ghana had resigned himself to the fact that "we have nothing to take back home".

The proposed convention became controversial when the US backed out from its earlier promises. At the last prepcom, the idea got bracketed because nobody could agree over the selection of the implementing agency which should service the preparation of the convention. Several Africans wanted this to be entrusted to the United Nations' Sudano-Sahelian Office (UNSO). But others, favouring the UN Environment Programme (UNEP), had raised objections.

By the time the African countries gathered in Rio, the matter had been complicated by the US which tried to get their support for a forest convention by holding the desertification convention as a carrot. The EC, led by the UK, joined hands in opposing the desertification convention on the grounds that "it was not sufficiently thought through". The US was also afraid of expanding new areas under the Global Environmental Facility (GEF) and the financial implications that the convention would have. The US proposed dropping of all references to the convention. Disappointment among the African nations was so great that Nadjie reacted, saying, "We want the Agenda 21 to be reborn under a new leadership".

The G-77 had anticipated a possible attempt by the North to link the desertification and forest conventions. In fact, the communique of the Kuala Lumpur meeting of G-77 ministers in April had ignored the issue of desertification to avoid this possible linkage, which had alienated a large number of African states. It was speculated that if the US linked the two conventions, the Africans would break ranks with the G-77 on the forest convention.

But before the rift could widen, the US and EC agreed to an international convention on desertification.