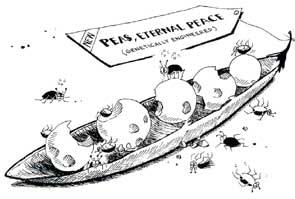 Every year, millions of tonnes of food are lost to the most voracious and abundant of animals -- the ubiquitous insects. Whether seeds be present on the plant or stored away carefully, insects worm their way into them, making them inedible. But humans have built up an impressive arsenal of chemicals to combat them in fierce biological warfare.

However, with growing concerns for environmental safety and food safety, scientists are going in for techniques such as molecular biology. Recently, collaborating scientists working in the US and Australia have figured out a way of incorporating a plant protein into pea seeds -- interfering with the digestion of bruchid beetles that usually feast on peas (Bio/Technology, Vol 12, No 8).

Although efforts to genetically engineer plants, making them resistant to insect attack, have been fairly successful over the past decade, most research has concentrated on making crops in the field resistant to pest attack. This attempt by scientists at the University of California, in San Diego, Purdue University in Indiana and at the division of plant industry at the Australian national science agency, marks the first time that seeds have been genetically engineered.

Scientists expect that this achievement will pave the way for several new varieties of weevil-protected legumes, including those that form important sources of proteins -- like chick peas, cow peas, and mung beans -- for people around the world. Says Indra Vasil, a plant molecular biologist at the University of Florida in Gainsville, "This kind of biotechnology, in which you get post-harvest protection of the seed, is going to be extremely useful in the developing countries."

One of the collaborating scientists Purdue, entomologist Larry Murdock, had earlier shown that a protein -- alpha amylase inhibitor -- protects the seeds of the common bean (Phaseolus vulgaris) from 2 storage pests -- the cowpea weevil (Callosobruchus maculatus) and the Azuki-bean weevil (C chinensis). This protein blocks the action of the starch-digesting enzyme amylase, thus preventing weevils from digesting the starch in the seeds.

The scientists at University of California, led by Maarten Chrispeels, had also isolated the gene that coded for the protein. Legumes like peas and beans are notoriously difficult to regenerate in tissue culture; fortunately for the team, the Australian scientists had had some success in this area. combining their expertise in several fields, the scientists have had remarkable success.

Not only did their transgenic seeds successfully produce the inhibitor protein, they found that the peas that produced large quantities of this protein successfully warded off weevil attack. Nearly every Azuki-bean weevil that fed on the transgenic peas died and those that survived developed more slowly than normal. The effect on the cowpea weevils was less dramatic, although their development was also retarded.