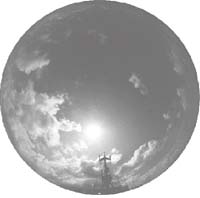 dark shadows loom large over the Indian Ocean. They are not monsoon clouds but a brown haze of pollutants caused by high concentrations of aerosols, tiny particles about a micron (one millionth of a meter) in diameter. This has been stated by scientists involved in the Indian Ocean Experiment ( indoex ), an international venture consisting of participants from India, Germany, France, Netherlands, usa and other western European nations.

The haze, which has risen to an altitude of 3 km above the sea level, is said to be comparable to the us in size. The northern part of the Indian Ocean, Arabian Sea, most of the Bay of Bengal and the equatorial regions of the Indian Ocean (upto 5 degrees south of the equator) are covered by the haze which could cause acid rain affecting terrestrial and marine life. Experts say that automobile emissions, particularly from diesel vehicles, is also contributing to the haze.
Step by step "The haze is nothing new. It is there in every urban region. But the unique aspect of this haze is the area it covers, its persistence for three months and its altitude in the atmosphere,' says V Ramanathan, director, Scripps Centre for Clouds, Chemistry and Climate ( C 4), in California.

Scientists say that the haze is caused by the high concentrations of tiny particles or aerosols, primarily comprising soot, sulfates, nitrates, organic particles, fly-ash and mineral dust. The haze also contains several gases including carbon monoxide ( co ), various organic compounds and sulfur dioxide ( so 2 ). According to experts, the concentration of these gases is conclusive evidence that the haze is caused by pollution.

"The haze has both natural and anthropogenic sources,' says Ramanathan. Combustion of fossil fuels and industrial and automobile emissions in the Indian sub-continent, China and Southeast Asia have all contributed to the haze formation. The pollutants are transported with the winter monsoons, when they move towards the sea from the higher latitudes.

"We also found large quantities of aerosols generated by forest fires from the Indonesian region,' says K Rajeev of C4. A P Mitra, Indian co-chief for indoex, agrees that the Indonesian forest fires may have contributed a lot to the haze. Experts feel that the growing economies of the Indian sub-continent and the neighboring countries produce a substantial amount of aerosols.
The villains "The transport sector, particularly diesel vehicles are the major culprits. We feel that the plume, emanating from Mumbai and the adjacent areas is due to diesel emissions,' he says. According to him, the increasing use of diesel could only make the matter worse.

Besides there are amazing amounts of no x , carbon monoxide ( co ), and ozone ( o 3 ) have been found even in the areas considered free from the haze, says Mitra. He says so 2 and no x are the two most important parameters for acid rain and emissions of both the gases are increasing in the Asian region along with particulate load. Hence, the possibility of acid rain cannot be ruled out. Says Mitra, "It can happen in some areas. However, the chances are greater near sources of pollution which happen to be urban centres.'

In the late spring and in summer, the haze is pushed back over the landmass by the monsoon winds. There it combines with the rain-bearing clouds and comes down as acid rain. Also the customary equatorial thunderstorms suck up aerosols and when it comes in contact with water, it turns into acid rain.

The aerosols have a cooling effect and the sulfates in the aerosols have a lot to do with it. "The effect of sulfate aerosols is equivalent to that of trillions of tiny mirrors floating in the sky, reflecting the sunlight back to space,' says an indoex news release. This reduces the amount of sunlight reaching the ocean surface. In the present case, particles reduce solar radiation absorbed by the ocean surface, by 10 per cent.

Does cooling down mean less rainfall? Mitra says, "Low temperature means less evaporation. This can have serious implications for water resources. The general moisture level of the atmosphere will also be reduced. These impacts cannot the ascertained immediately, but rainfall may decrease.' Ramanathan, too, says it is premature to answer this question. "First, we have to analyse the data comprehensively. Then we have to assess what the regional climate impacts are. The amount of solar energy absorbed by the surface, amongst other factors such as winds, regulates the evaporation of moisture from the ocean and the land. The evaporation in turn, amongst other factors, regulates rainfall. The haze does reduce solar radiation. How all these factors will interact is not certain,' he says.

Warming or cooling?
The debate is whether the cooling effect of aerosols can negate the warming effect of the greenhouse gases and can be used as a tool against global warming. However, Rajeev says, greenhouse gases have been accumulating over a longer period of time and also have a very long lifespan compared to that of the sulfates in the aerosols, which persist upto a few weeks. So, the latter cannot be treated as an effective tool to fight global warming. Mitra, however, states, "The conclusions drawn from this phenomenon (haze) are that regional climate change may trigger off a change at the global level. And aerosols could be a major determinant in this change.'