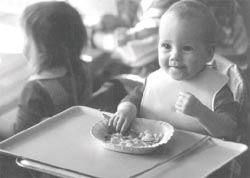 the mental development of babies improves significantly when infant formula is enriched with two essential fatty acids that are found in mother's milk, says a recent study. Researchers at the Retina Foundation of the Southwest in Dallas, Texas, usa , claim that the intellectual capacity of 18-month-olds shows a significant increase in the intelligence quotient ( iq ) when they were fed this enriched formula food for four months ( Developmental Medicine and Child Neurology , Vol 42, No 2).

The two fatty acids, docosahexaenoic acid ( dha ) and arachidonic acid ( aa ), present in breast milk, are believed to influence the development of the nervous system. The Dallas study is the first in which formula supplemented with fatty acids is compared with unsupplemented formula. Eileen E Birch, who led the study, says adding the fatty acids can closely mimic the effect of mother's milk on brain development.

The study is one of several planned to determine the safety and efficacy of the substances and whether they can and should be added to infant formulas in the us . This trial adds to growing international support towards enriching the much-maligned commercial baby formula ingredients. Although dha and aa are not used in infant formulas in the us , both substances are routinely added to infant formula throughout Europe and Asia. More than 60 countries have approved supplementing formula with dha and aa .

Birch and her colleagues divided 56 newborns (26 boys and 30 girls) into three groups and fed them different formula food for four months. A control group received a commercial baby food with no addition. One test group got formula supplemented with dha , while the third group got both dha and aa . At the end of four months, all three groups began receiving only commercial formula. At 18 months of age, the children were tested for the mental development index ( mdi ) on the Bayley Scales of Infant Development, a standard test used to gauge physical and mental progress of infants. mdi measures the memory of small children, their ability to solve simple problems and their language skills. A score of 100 is considered the national average for mental development.

No differences were noticed among the three groups with regard to motor skills such as walking, jumping, and drawing. However, the children differed significantly on mdi . Birch says infants receiving both dha and aa scored 105.6 on the mental development index of the Bayley Scales. She said this is virtually identical to the 106 score of a separate group of babies, in another study, who were only breast-fed.

For the control group of infants, who received commercial formula, the average score was 98. This is within the statistical range of normal, but seven points below the average for the test group. For the group that received formula supplemented only with dha , the score was about 102. Birch said that although the infants on supplemented formula scored significantly higher than the control group, the study does not prove that there will be a similar iq difference when the children grow up. "The test is not a perfect predictor of school-age intelligence,' said Birch. "However, it does provide a good profile of mental development at the early stage.'