Snuffing out lives with pollution 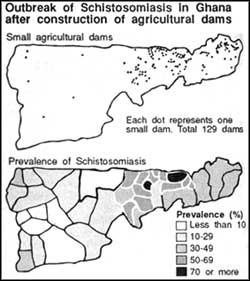 TAKE CARE of your economics, your lifestyle and your environment, and your health will also take care of itself. The report of the WHO Commission on Health and Environment, Our Planet, Our Health, prepared for the forthcoming Earth Summit, inextricably links environment and health.

Yet, the report argues, health rarely receives high priority in environmental policies. It claims that one of the most pressing problems in the world today is ill-health and premature death caused by biological and chemical agents in the environment -- in water, food, air and soil.

The report highlights global inequities by citing the problems of developing countries, where health problems related to diarrheal, parasitic and mosquito-borne diseases are most acute. However, respiratory problems, diseases caused by biological and chemical agents such as tobacco smoke, and chemical and physical hazards at home and at the workplace, are common to both developed and developing countries.

Poverty plays a major role in the sustenance of disease. The report claims that over one billion people lack the income or land to meet such basic needs as food, water and shelter. Children are invariably the greatest sufferers. A study of infant mortality rates in an Indian village has found a ten-fold difference between the poorest families, such as landless labourers, where 180 infants died per 1,000 live births, and the richest families. Similarly, in certain slums in Delhi, the child mortality rate was found to be 221 for every 1,000 births. But the poorer castes within the same slums had twice this child mortality rate.

Foodborne diseases are among the most common. The commission suggests several measures to promote health and more sustainable patterns of food production, which include crop rotation, use of correct dosages of pesticides, avoidance of excessive fertiliser use and reduction of food losses before and after harvesting.

The world pesticide market grew from US $0.85 billion in 1960 to US $21.5 billion in 1989 -- a 25-fold increase. The commission says that, while accidental poisoning still occurs in developed countries, the majority of such cases occur in developing countries. An estimated 220,000 deaths occur every year due to pesticides, including suicides. Annual pesticide exposures also result in some 37,000 cancer cases every year.

The commission stresses that fresh water is essential to health. It suggests that while water pollution should be treated to prevent bacteriological and parasitical diseases, more emphasis should be placed on making the best use of existing water supplies.

The report argues that the construction of water impoundments for agriculture accelerates the spread of water-borne diseases such as malaria and schistosomiasis. The report points to the epidemic of schistosomiasis that took place in 38 districts of the Upper Region of Ghana, where small agricultural dams had been constructed.

In the worst-affected areas, more than 50 per cent of the population was infected, while in certain hot spots, the prevalence was over 70 per cent. Other diseases like filaria, malaria and guinea worms also increased following the construction of these dams. The commission complains that "despite such experiences, both governments and development agencies still fail to undertake disease prevention measures as a central part of any project to construct or restore agriculture dams".

Clean water can play a critical role in improving health. The report claims that clean water and a sanitary environment can almost wipe out diseases such as cholera, typhoid, scabies and guinea worms. Similarly, incidence of trachoma, conjunctivitis, yaws and schistosomiasis can be reduced by 60 to 70 per cent, and diarrheal diseases and skin infections by 40 to 50 per cent.

Energy development has also had significant environmental and health effects. More than one billion city-dwellers worldwide are today exposed to high levels of air pollution, resulting in respiratory diseases and increased mortality. The commission stresses the urgent need to adopt alternative methods of energy as also to reduce indoor and urban air pollution.

Industrialised countries with only 15 per cent of the world's population are responsible for 77 per cent of all hazardous industrial waste. The commission points out that the cost of controlled disposal of hazardous waste in 1988 cost US $19 billion. More than 80 per cent of the gases in the atmosphere that contribute to the greenhouse effect arise from production or consumption in the developed world.

The commission laments the fact that large amounts of hazardous wastes are dumped in developing countries by industrialised nations. A WHO investigation of industries that resulted from investments by foreign corporations in South Korea found that these companies were applying emission control measures in keeping with local legislation. But these measures were less stringent than in their home countries. In effect, these companies have been transferring potentially polluting industries to South Korea.

The report stresses the need for each country to initiate a planning process, where health and environmental considerations influence decisions about plant siting, design characteristics and the incorporation of safety and pollution control devices. It also emphasises the need to adhere to "the polluter pays" principle, whereby industry bears full responsibility and pays the cost to control hazardous wastes.