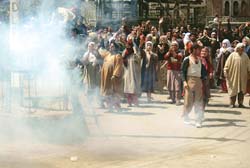 on april 13, 2007, residents of Achen, a locality in Srinagar, and the municipal authorities agreed that three new dumpsites should be set up in three zones of the city, to supplement the existing one in Achen. A committee headed by deputy commissioner Ijaz Ahmed was set up to identify the new sites, each handling 25 per cent of the city's waste and lessening the load on Achen. "The new sites will be decided only after consulting residents of the relevant areas,' said Quazi Mohammad Afzal, state minister of urban development and water supply.
The trigger The agreement came after residents took to the streets on April 5, 2007, protesting against dumping at the Achen site and blocked garbage trucks. They demanded the dump be abandoned. Later, the situation turned violent with clashes between police and residents.The agitation continued for nine days, during which waste lay littered and unattended in Srinagar posing a health hazard.

smc officials, however, differ on what triggered the protest. "The protest was fuelled by some influential people who have purchased land around the smc dumping ground,' said Manzoor Ahmad Turray, a Srinagar Municipal Corporation (smc) officer dealing with solid waste management. smc commissioner Syed Haq Nawaz offered the same argument, saying that shifting the dump would increase the price of land in the neighbourhood. But smc mayor Abdul Rashid Pandit had a different explanation. He said residents wanted a road to be built through the site occupied by the dump.

Residents, however, have had several long-standing complaints against the dumpsite. In 2006, they conveyed their grievances to the municipal authorities, but nothing transpired. "We had asked smc to look into the unscientific manner of handling garbage but they did not pay heed. We had no option but to protest,' said Tariq Ahmad, resident of Saidpora village in Achen. Agricultural land was also affected. "Decomposing waste produces highly toxic fluids that have made our agriculture fields barren,' said Bashir Ahmad, a resident.

Environmentalists have pointed to the hazards created by the dump for a long time. "The problem is not just about garbage disposal but of proper solid waste management. smc handles the city's garbage unscientifically and violates the Municipal Solid Wastes (Management and Handling) Rules, 2000,' said Fazal Ali of Green Kashmir, a Srinagar-based ngo. "The system is ailing. smc's garbage cans are not distributed properly and the concrete sheds remain littered. They do not follow waste segregation either.'

In June 2006, Farah Khan, a law student at Kashmir University, filed a petition in the Jammu and Kashmir High Court against the dump yard. In response, the court had ruled that smc should identify an alternative site and adopt waste segregation measures. But smc health officer Shafqat Khan claimed the corporation had not received formal orders from the court.
It's official The Jammu and Kashmir State Pollution Control Board (spcb) has also come down heavily on smc for its unscientific approach to handling garbage. A report by spcb, released on April 9, 2007, validated the residents' allegations. The report said that medical waste was found mixed with municipal waste.It blamed smc for overloaded and uncovered transportation of waste to the dump. "Scientific and safe disposal of municipal solid waste needs to be strictly ensured to safeguard public health, environment and prevent air and water pollution,' said Mian Javed, regional director, spcb. The report recommended smc segregate waste, monitor groundwater quality around the site to check contamination of water and construct a proper drainage system.

spcb also issued a warning to the corporation. "We will closely monitor the garbage disposal system. If smc doesn't adhere to the norms we will be forced to withdraw our consent for the dumping site,' said Javed.

In defence, Nawaz said they covered all waste with soil but would now implement a scientific manner of disposing it under a Rs 22-crore Asian Development Bank (adb) project commissioned last year. "The project is to be completed in two phases. In the first, we plan to construct a road to carry waste from the city to the dumpyard. The road will pass through the outskirts of the Saidpora village to avoid inhabited areas. Acquisition of land for this will be done in two months. In the second phase, systems will be set up for the scientific disposal of waste,' said Nawaz. He also said the adb project had provisions for a wall around the dumpsite, proper drainage and landscaping around the dump.