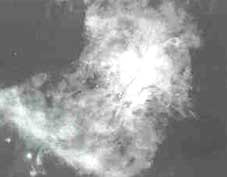 AN ARRESTING array of photographs released by the National Aeronautics and Space Administration (NASA) on November 2 provides amazing insights into the wonders of the cosmos. Captured through the Hubble Space Telescope, the images - of events thousands of years old but reaching the Hubble only this April - are truly Spectacular: new born stars emerging from dense clouds of gas, the wonders of the Cartwheel galaxy smashed through its centre by another galaxy, the Cat's Eye Nebula surrounded by a brilliant orange ball of gas, the violently unstable Eta Carinae in the southern constellation Carina, and the like.

Perhaps the most dramatic of the photographs is the latest which reveals the mysteri es of stellar creation: clouds of gas that stand almost 10 trillion krn high, illuminated with ultraviolet radiation from nearby stars. They are 7,000 light years away from earth - more -than 400 times as distant as the sun.

The thrill of being witness to the birth of stars is unlikely to pall for us scientists. "People had come up with plau- sible theories about star birth," says Arizona State University astronomer Jeff Hester, leader of the team that took the picture, "Then, we got this image - totally out of left field, totally unexpected. And suddenly you could see clearly what's actually happening."

Making the exciting new images a reality for scientists worldwide, is the Hubble Space Telescope, once nearly written off because of an inaccurately ground mirror. Over the last two years, the Hubble has justified its existence many times over by offering pictures of galaxies that are 10 times Star nursery. some 1,500 light years from Earth, the gigantic and fiery Orion nebula has mothered countless stars sharper than those produced by earthbound telescopes. Among the major achievements of the telescope has been its revelation about stars which are older than the universe itself At the core of a particular galaxy, it has found a black hole as massive as three billion suns. Now, it is unravelling the myster- ies about quasars - bright star-like objects - seen halfway across the universe..

Within 10 years before it is finally shelved, the Hubble is likely to answer many key questions about the cosmos: such as how big and old the universe is, what it is constituted of, how the galaxies came into existence and whether other earth-like planets orbit other sunlike stars, Says John Bahcall, astrophysicist at the Institute for Advanced Study in Princeton, "We made the us Congress a lot of bold promises about how much we'd learn from the Hubble. I'm quite relieved to be able to say we were right."

On the cards are several improvements on the telescope that will make it much more powerful than it currently is: Shuttle missions are slotted to dock at the telescope in 1997, 1999 and 2002 to upgrade the Hubble's camera and other instruments. "We're going to be replacing the original '70s and'80s technology with '90s instruments," says NASA's Ed Weiler, Hubble's chief scientist.

But a question mark hangs over what will happen to the Hubble when its official working lifetime ends in AD 2005, when its guaranteed funding runs out. The decision on whether to continue upgraclation of the observatory will have to be taken by NASA and the us Congress. Well within the realm of reality is the possibility that telescopes in space will become obsolete as a new generation, of ground-based and sharpfocus telescopes take over.