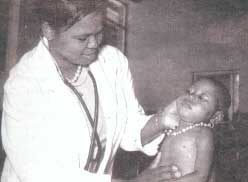 In June, for the first time, malaria control was included in the ;agenda of the Organisation of African Unity (OAU) Summit in Zimbabwe. ReportedN, nine out of 10 cases occur in sub- Saharan Africa. Campaigners called upon international organisations to cooperate in a 30-year old programme for developing measures to eradicate the disease which claims up to about two million lives per year in the developing world.

Brian Greenwood of the London School of Hygiene and Tropical Medicine said, "The importance of the OAU meeting and the statement on malaria is that it sets the appropriate political frame- work for international donors to put more resources into malaria. There is a need for a continuing programme of basic research. That will throw up completely new compounds."

A worldwide appeal to this effect was recently published in the Nature magazine. The signatories of the appeal urged the North to build on the experience of foreign-funded laboratories in Gambia, Kenya, Senegal and Mali by making greater use of African scientists and workers in vaccine research, in reporting on transmission patterns and in field trials of drugs. Next, a meeting has been planned this month in the Hague aiming at tapping potential donors for anti- malaria drives.