Sun lighting up the valley 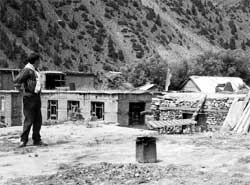 come winter and the inhabitants of Lahaul Spiti district of Himachal Pradesh face bleak days ahead. Heavy snow brings life to a grinding halt. But an exception is the Mayad valley, where solar home lighting systems have brought more than a glimmer of cheer on the faces of its inhabitants.

In 1998, Barefoot Solar Engineers (bses) from the Social Work and Research Centre (swrc), an non-governmental organisation based in Tilonia, Rajasthan, installed 100 solar home lighting systems in the valley. The Council for People's Action in the Advancement of Rural Technology (capart), an autonomous body, funded the project costing Rs 23.5 lakhs.

Mayad valley comprises 10 villages out of which four are inaccessible by road and have no connection to the grid. Even the remaining six electrified villages receive erratic power supply during summer and the lines are completely cut off during winter when the snow piles up more than two metres high. So the people have to gear up for seven months of hardship by collecting kerosene, fuelwood and fodder during the warmer days.

It is because of such difficult survival pattern of the local people that the region was chosen for solar electrification. But the same problems deterred two bses, who came to conduct a survey of the region. Seeing the harsh conditions they returned to Tilonia in vain. "After seeing the living condition of the people in the region, I gave up hope on my first trip,' says Mohan Singh Bisht, one of the two bses. But this did not perturb them for long: they took up the challenge and soon returned to the valley. After successive interactions with the local panchayat (village council) leaders, the bses gradually started giving the project a shape.

However, the worst was yet to come. Since the valley is inaccessible by road, vehicles can only reach up to Shakoli village. Moreover, the route is interrupted by numerous rivulets, which become highly turbulent during monsoons and freeze during winter. But this did not deter the confidence of 149 members of the local community (including women and children), who volunteered to carry the materials consisting of 1,090 solar home lighting systems and other equipments, till Tingarat village, which is approximately 14 kms from Shakoli. The task was completed in two days. Regular and good quality power supply brought positive changes in the lifestyle. "The women are now able to knit till late at night and winters are not as bleak as before,' says Chi Chiangmo Dharma, a bse. Currently there are seven bses in the valley, out of which five were trained in Tilonia, including three women and two men. They operate from the Rural Electronic Workshops (rews) and receive a monthly salary of approximately Rs 1,700.
Another ray of hope The success of this project led to another solar electrification project in the same region. Under its Rural Energy Programme, the United Nations Development Programme (undp) supplied 90 solar home lighting systems and 75 solar lanterns with 10 years warranty. Under this project, the beneficiaries made a down payment ranging from Rs 3,000 to Rs 500 respectively. Some beneficiaries who made the Rs 500 down payment are under an obligation to pay a monthly fee of approximately Rs 25 for 10 years. "Initially, we had envisaged a lesser down payment of about Rs 500, but we soon realised that all of them were willing to pay Rs 3,000,' mentions Bhaskar Goswami, a undp consultant with capart, who handles the project.
The solar journey The concept of solar energy is not totally new to the people of Mayad valley. Himurja, the nodal agency of the Union ministry of non-conventional energy sources (mnes), installed a few solar panels in the region, but due to poor maintenance most of them are rendered useless. "Since the after sales service was poor, the panels are out of order most of the time,' mentions Puran Singh, the former head of Tingarat panchayat . However, now things have changed for the inhabitants of the valley with the solar home lighting systems and efforts of capart and swrc brightening up their lives.