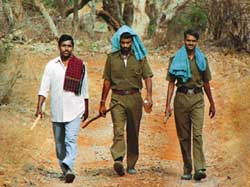 the first-ever meeting of the National Tiger Conservation Authority, held on November 28, 2006, has re-affirmed the Tiger Task Force's recommendations and laid emphasis on the involvement of local people in tiger conservation. It has sought more than Rs 100 crore from the 11th Five-Year Plan when Project Tiger got only Rs 30 crore.

In the meeting it was decided to share the benefits of conservation with forest-dwelling communities. "Since previous provisions did not work for tiger conservation or address livelihood issues of forest-dwelling communities, now people's participation will reduce conflict and provide them sources of livelihood,' says H S Panwar, member of the authority. It will also ask all tiger reserve states to launch a special drive to recruit local forest-dwelling people to fill ground staff vacancies in all tiger reserves."If necessary the eligibility criteria for these vacancies will be relaxed,' said Rajesh Gopal, director, Project Tiger and member-secretary of the authority.

The authority comprises official and non-official members. The guideline for the selection of non-official members by the Union minister for environment and forests (moef) has evoked criticism. They state that members will have to declare that they do not have any financial or other interests that may affect their functioning. However, moef argues that these guidelines will help in keeping away people with personal agendas.