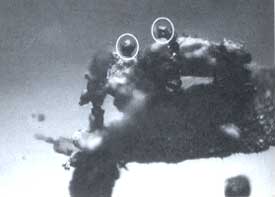 LIFE on the Earth was a result of a momentous event in the pre-Cambrian era (one billion to two billion years ago). Levels of oxygen rose in the planet's atmosphere, leading to an explosive development of life. But the increase in oxygen levels and its dating has always been somewhat uncertain due to of lack of preserved fossils and materials from that era.

Not any more, if you go by a group of geologists which has found an ingenious way 4of measuring oxygen levels of that era. They have discovered 1.4 billion-year-old tiny spherical cosmic objects (spherules) in sandstone in Finland. These microscopic relics from the pre-Cambrian era are a reliable means to measure oxygen levels the Earth's atmosphere a billion years ago.

About 40,000 tonnes of cosmic debris bombards the Earth every year, mostly from comets and asteroids. The majority of the particles are very tiny, about 200 to 300 micrometers (micro-meter is one-millionth of a meter) in diameter. When these particles enter the atmosphere, most of them vaporise while some survive.

Cosmic spherules are by far the most abundant extra -terrestrial objects on our planet. They are found in ocean beds, polar ice caps and even sedimentary rocks. Those found in sediment give an extraordinary amount of information regarding the history of meteor showers on Earth through the ages, apart from telling us about the composition of the planet's atmosphere. Till the recent discovery in Finland, 200 million-year-old spherules had been reported. But the information required was not there as they were heavily degraded.

The spherules are formed in the upper atmosphere (above 80 km) when small meteoroids melt due to friction. On their journey towards the Earth, the melted particles encounter a large mass of air. They interact with the gases in the atmosphere. Due to the large amount of oxygen in the atmosphere, the spherules contain a small metallic core surrounded by oxides of iron and other metals.

Similarly, in the early epochs of the history of the Earth, the spherules would have in them a chemical tracer for the atmospheric composition. Moreover, this tracer would be a truly global sample as the particles oxidise in a well-mixed layer of the atmosphere.

A team of geologists from Germany and Finland led by A Deutsch have found unaltered cosmic spherules in a 1.4 billion-year-old sandstone bed. The spherules isolated by the geologists are up to 20 micrometers wide. They were remarkably unaltered in their chemical composition. This is a rarity, as depositions show severe chemical alteration. The chemical composition of the samples suggests that the original material was rich in iron, magnesium and nickel.

The inference: oxygen levels in the upper atmosphere about 1.4 billion years ago were already resembling the present atmosphere. Scientists believe that levels of oxygen were much lower around 2.5 billion years ago and grew steadily to their present values in the last 1.8 billion years (Nature, Vol 395, No 6698).

With reports of planets outside the Solar system confirmed now, several missions are being planned for detection of these objects around other stars. By using spherules to study the history of our the Solar system, we would be able to understand the formation and evolution of these other systems as well.