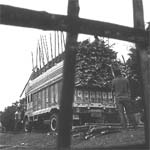 the prime minister, A B Vajpayee, has said that his government will approach the Supreme Court to lift the interim ban on tree felling and the movement of already cut timber in the forests. Speaking at a meeting with northeastern chief ministers in Delhi on May 8, Vajpayee told the chief ministers: "I am aware of the current difficulties being faced in this regard. My government is committed to evolve a suitable mechanism to eliminate these difficulties". Jaswant Singh, the deputy chairperson of the planning commission, who also attended the meeting, later told mediapersons that the government had already approached the apex court in this regard. The interim ban came into effect on December 12, 1996.

The northeastern states, particularly Arunachal Pradesh, Assam and Meghalaya, are the worst affected as the ban has resulted in massive revenue loss for them.Last year, Assam and Manipur had filed petitions in the apex court citing the same reason. Assam has lost about Rs 78 crore in revenue due to the Supreme Court's interim ban on transportation of forest produce from the north-east, according to the state government sources. Similarly, Arunachal Pradesh has also lost about Rs 85 crore of revenue.

For Assam, the revenue from territorial forest alone has come down to Rs 11,82,11,000 in 1996-97 from Rs 16,17,72,000 in 1995-96. Meghalaya is facing political problems due to this ban. There have been strong protests from the Garo and Khasi Autonomous Hill Councils who feel that the interim ban is an infringement of their autonomy and rights over the forests.

"The ban is causing extreme human difficulties in Arunachal Pradesh where about 80 per cent of the people are dependent on forests. The ban violates their fundamental right to livelihood," said Gegong Apang, the chief minister of Arunachal Pradesh. Assam and Arunachal Pradesh have contested the findings of the High Power Committee (hpc) which was set up by the apex court to assess the situation in the Northeast.

The hpc, headed by T V Rajeswar Rao, reported that the number of saw mills in Arunachal had doubled during 1983-1996 and that no one from Arunachal Pradesh benefited by timber trade. "We have already submitted statistics which show that 80 per cent of the population are benefited by the timber trade and the report doesn't paint the real picture", said Apang.

Meanwhile, a spokesperson in the prime minister's office (pmo) has said that there has been no follow-up to the prime minister's assurance as his office is "preoccupied with the nuclear explosions". Similarly, the ministry of environment and forests has also not received any communication from the pmo in this matter.