Ukraine says no to nukes 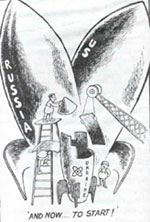 IN A major diplomatic move for nuclear-armed countries, Ukraine, which became the world's 3rd largest nuclear power after the Soviet Union's constituent states disintegrated into nations, signed the nuclear Non-Proliferation Treaty (npt) in early December 1994. Ukraine's assent to the treaty crowns 3 years of coaxing by Washington to get the country to renounce its formidable nuclear arsenal, which account for 17 per cent of the strategic weapons capacities of the Commonwealth of Independent States.

Under what looks like a neatly wrapped up deal between the big powers and Ukraine, the latter claims it has won "extensive guarantees" in return for signing the npt. Although the agreement consists largely of run-of-the-mill pledges by the nuclear countries under the npt's terms, Ukraine seems satisfied with assurances that the us, Russia and Britain would respect its borders, refrain from using force against it, and seek help from the United Nations Security Council if the country were threatened with nuclear aggression. The 3 co-signatories have also pledged to refrain from economic coercion infringing Kiev's sovereignty.

According to international observers, Ukraine's rather tame surrender to the big powers smacks of realpolitik. The country is haunted by fears of superior Russian military and financial muscle, and it also faces acute internal political differences. Its apprehensions are stoked by statements made by Russian foreign policy experts that Russia should attempt to take over as much as possible of the rich Ukranian economy.

As us defence contractors and Ukrainian engineers get down to the nitty-gritties of dismantling an estimated 1,800 nuclear warheads, the reverberations of Ukraine's move is expected to be felt far beyond its borders. Already, the us is citing Ukraine's example to bolster its case for indefinitely extending the npt, due for a review in mid- April 1995. In South Asia, the heat is being turned on India and Pakistan to sign the npt to lead them into what the us euphemistically terms the treaty's "security umbrella".

"The basic implication of the recent developments in Ukraine is that the major nuclear powers are quite determined to ensure that countries with nuclear weapons capability fall in line and accept a discriminatory regime focussing on horizontal non-proliferation," observes J N Dixit, former Indian foreign secretary. "In effect, non-nuclear weapon countries would not be allowed to develop their capability, while threshold nuclear powers would not be allowed to have a full capacity. Ukraine has accepted all the limitations of the npt applicable to the non-nuclear weapon states, despite having the capacity to produce nuclear weapons."

However, Ukraine's signature on the npt has cleared the decks for the 1991 Strategic Arms Reduction Treaty (start)- 1 to become formally operative. The treaty provides for the elimination of 9,000 us and former Soviet Union's nuclear warheads. Ukraine's withdrawal has also pushed the big powers closer to the 1992 start-2 accord which fixes a ceiling on 3,000 to 3,500 warheads. But us military experts say that the us government should reduce to 3,000 warheads to display its commitment to disarmament.

Says Uday Bhaskar, senior fellow of the Institute of Defence Studies and Analysis, "If Ukraine had not signed the npt, start-1 could not have been implemented and start-2 could not have even been dreamt of. In the long run, therefore, it is an important step in global disarmament."