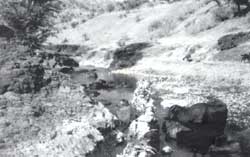 VISITORS to the remote Sondwa block of Jhabua district in Madhya Pradesh (MP) are often taken aback by the sight of water scaling the steep hills to irrigate fields. This seeming defiance of the law of gravity is a system devised by Bhil tribals which takes advantage of the peculiarities of the terrain to divert water from swiftly flowing hilly streams into irrigation channels called pats. Within a period of four decades, the Bhils have developed the pat system, a practical and ecologically sound method of water manage- ment. The development of this tech- nique could be seen as the Bhil retort to the state's destructive practices which have ravaged the region's environment.

The Bhils belonging to the Vindhya and Satpura hills -flanking the river Narmada - traditionally practised swidden (slash and burn) agriculture. The region's soil loses its fertility within four or five years and needs to be left uncultivated to regenerate itself. As was the case elsewhere in MP, the British disapproved of the practice as it clashed with their plans of commercially exploiting the timber resources of the state. The Bhils of Jhabua, Dhar and Khargaon districts in MP, however, remained relatively free to follow an independent lifestyle because these areas were ruled by native princes and did not come under the purview of the British. The situation changed in the post-independence period when the state of MP came into being in 1956. The areas inhabited by the Bhils were now under the control of the modern Indian state. Shifting cultivation was terminated and the Bhils were forced to settle on the land they happened to be cultivating at the time. The management of the forests was handed over to the forest department, and logging contractors in collusion with corrupt forest department officials not only logged more than the prescribed number of trees, but even made char- coal out of the non timber varieties of trees. Raisingh Anga of Attha says, "1 used to be the forest guard's acquaintance and at night, when we would go out, he used to fix the hammer's mark on trees in excess of those marked for felling."

This combination of being forced to settle on inferior lands with steep slopes and the destruction of their forests severely affected the tribals' livelihood. Lower yields from agriculture, animal husbandry and minor forest produce disturbed their well-balanced subsistence economy.

Under these circumstances, the Bhils must have been forced to think about ways in which they could increase the productivity of their farms. It is not clear as to who really hit upon the idea of the pat for irrigation or the idea of plugging gullies to create new fields. Chena Ajnaharia of Badi Vaigalgaon had built his own pat in his youth and operates it even now. "One day it just occurred to me that water could be brought up to my field and I began studying the stream next to my field. I somehow knew how to do it," he recollects. Like many others, this too might have been an accidental discovery.

The people of Bhitada village (located at the confluence of Kari, a stream, and the river Narmada), have developed this unique system to possibly its best form. Kahariya Runsingh, a resident of the village and one of the architects of the communal pat says, "My grandfather and his brothers fled from Attha, a village high up in the hills to escape the begar (free labour) being imposed by the raja of Bakhatgarh." The villagers have built typical country tile-roof huts on their own fields, rather than in a cluster. Even though the bed of the Kari, at its confluence with the Narmada is positioned about 20 in below the farms on its banks, the fields are lush green with maize and gram, grown with water brought by a four km-long pat from a point upstream.

According to Bansingh Gulabsingh, one of the younger farmers, "After harvesting the kharif crop of bajra (millet) and maize, one member from each family is spared to join others in the repair and building of the diversion bunds." The process is quite a labourious one. The diversion bunds across the stream are constructed by piling up stones and then lining them with teak leaves and mud, to make them leak-proof. The pat channel has to steer through the nullahs (deep ditches) that join the stream, before reaching the fields. Stone aqueducts are built to span these nullahs in a manner similar to the diversion bunds. Particularly skillful is the manner in which the narrow channels have been cut in the face of the sheer stone cliffs. The villagers irrigate their fields by turns. The channel requires constant maintenance and it is the duty of the family irrigating its fields on a certain day, to take care of the pat for that day. It takes about two weeks to get the pat flowing and the winter crop is sown in early November.

Chelarsingh and his brothers are doubly industrious because they cultivate a patch of land on the bed of the Narmada - where it leaves a deposit of silt on receding after the monsoons - in addition-to the field near their house. The brothers construct a pat over the rocky river-bed, to transport water to the silted patch. They carry the water over intervening depressions in hollowed out trVe trunks. Says Chelarsingh, "When our fathers first constructed the pat they gave up because there were not enough people in the village to do all the work. But now our sons have grown tip and we can muster enough people. Over the past five years, we have double-cropped some 100 more hectares because of the pat."

The tragedy is that most of Bhitada is going to be submerged by the Sardar Sarovar dam, being built on the river Narmada. It is no wonder that the people are angry at this destructive interference by the government, just when they had managed to make their land yield plentiful harvests. Highly critical about the government and its attitude, Banbai says, "The government thinks that we are like the monkeys in the hills, which run away at the very sight of human beings. But we are going to teach it a thing or two about caring for people and watering fields without drowning them." Patel Bhangia laments the loss of the village's traditional summer fishing points. He also says that the forests cared for by the villagers of Sondwa block were under threat. The government had jailed these villagers when they protested against the harm caused to the water and soil.

A steep eight-kin-long climb up the hills and valleys from Bhitada is the Karabara, the ridge that separates the watersheds of the Kari and the Kara streams. It also marks the dividing line between the part of the forest directly accessible by road and that which is not.The catchment area of the Kara is much more denuded than that of the Kari. The Karabara is held in considerable reverence by tribals; who come from far and wide to pay homage to the holy stones placed on the ridge. The Karabara is a barrier which separates not only two geographical watersheds, but two altogether different worldviews.

The people of the first two villages in theifatchment area of the Kara - Gendra and Attha - have organised themselves to protect their forests. In the