US firm to explore oil beneath Black Sea 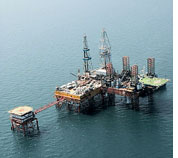 The Ukrainian government has for the first time allowed a us energy player to explore and develop its potential oil deposits buried beneath the Black Sea. The government believes the reservoir called Prykerchenska could yield billions of barrels of oil.

The outgoing government of Prime Minister Viktor Yanukovych approved a production sharing agreement with the Vanco Energy Company in the first week of October, ending more than a year and a half of tough negotiations. Although the agreement still has to be signed by Deputy Prime Minister Andriy Kluyev, it marks the first breakthrough by a us oil company into Ukraine's promising energy market as well as the first compnay to explore oil deposits in the Black Sea.

If significant oil deposits are found in Prykerchenska