Venus' volcanoes have lost their fire 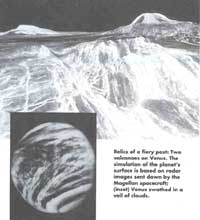 ALL PLANETS are believed to possess hot interiors that periodic volcanic activity helps to cool. But now American geophysicists have found Venus to be the odd one out (Science, Vol 259, No 5100). Quite unlike its namesake -- the goddess Venus who was known for her profligacy -- the planet, after a massive volcanic outburst 500 million years ago, has been a perfect picture of peace and contentment, say Gerald Schaber of the US Geological Survey and Robert Strom of the University of Arizona.

According to the scientists, as Venus' surface is pitted by a steady rain of meteorites, if the planet had experienced regular volcanic outbursts, any patch of surface that had been wiped clean of craters by volcanic lava more recently than others would have fewer, more widely scattered craters. But recent images of Venus sent down by the Magellan spacecraft, upon which Schaber and Strom have based their hypothesis, reveal the craters are mostly evenly spaced, which, they contend, points to a lava outflow that covered the whole surface of the planet about 500 million years ago.

However, Roger Phillips, geophysicist at Washington University in St Louis, says Venus' surface is not uniform. According to Phillips, the surface seems to be composed of three different regions belonging to different ages, rather than the pervasive single age predicted by the model set up by Schaber and Strom. Since each of the three regions covers a substantial area of the planet, it implies major volcanic activity at different times.

Meanwhile, Stephen Saunders, a geologist with the Magellan Project, warns against hasty interpretations and suggests "some rather detailed geological analysis" of the planet's images should be carried out before reaching a conclusion.