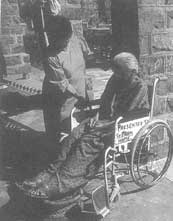 LIKE most other tissues in the human body, nerve tissues, too, can regenerate after being damaged. However, a damage to the central nervous system - the spinal cord and the brain - is a different matter. When this happens, the nerve bundles begin to repair themselves feebly, but soon degenerate around the damaged site. For many patients, this means a life confined to the wheelchair, as the brain can no longer 'tell' the legs or arms what to do, and the spinal cord cannot communicate with the brain.

Every year, spinal cord injuries cripple thousands across the world. Most of them are people injured in automobile crashes or other accidents. One celebrity who has suffered such an agonising fate recently is the former 'Superman' actor Christopher Reeve. Reeve became paralysed from below the neck in 1995 after falling from a horse. The irony of the reel life 'Man of Steel' suffering a fate so disturbing in real life has increased public awareness with Reeve playing the role of a crusader for more funds to support research into spinal cord injuries.

Research has been going on in a number of US and Swedish laboratories, where researchers have been trying to find ways to arrest the degeneration of the spinal cord nerves at the injury site. Nurit Kalderon and Zvi Fuks of the New York-based Memorial Sloan-Kettering Cancer Center found that rats, whose spinal cords were cut on one side, showed a healthy growth of nerve cells when treated with high doses of X-rays. The treatment, say the researchers, also arrested further nerve degeneration. Subsequent experiments confirmed that nerve impulses could be transmitted across injury sites with X-ray treatment after the injury. The treatment even allowed some rats that suffered a complete cut across their spinal cord to regain partial use of their hind limbs.

Some success with a different approach to spinal cord repair had also been reported recently by Henrich Cheng, Yihai Cac, and Lars Olson of the Karolinska Institute in Stockholm, Sweden. The team removed a section of rats' spinal cords, bridged the gap with nerves transplanted from other body parts, and finally added a protein glue containing a nerve growth factor. Subsequently, the rodents regained some use of their hind limbs, an achievement that researchers call a 'milestone'. However, the Swedish technique cannot be applied to humans, unless researchers discover a way to achieve regeneration without removing a section of cord. Experiments are still on, but the progress is slower than most would like. Fewer than 30 laboratories in the US are engaged in spinal cord injury research.

Apart from grafting techniques aimed at the regeneration of the damaged spinal cords, scientists are also trying out innovative methods to coax the spinal cord to 'listen' to the nerves of the limbs. At the Annual Meeting of the National Neurotrauma Society in Los Angeles, USA, Susan Harkema of the University of California, Los Angeles (UCLA), described how seven of her patients, with severed spinal cords, were able to learn the rudiments of walking all over again.

This radical approach was based on the hypothesis Harkema developed over a long period of time. Research has shown that laboratory animals with completely severed spinal cords were trained to step on a treadmill with their otherwise paralysed hind limbs. These results have never been reproduced in primates, since scientists suspect that in more intelligent animals, movement is far more dependent on the spinal cord-brain linkage than in dogs and cats. Yet Harkerna took on this unconventional route as she believed that in humans, spinal cord plays a far bigger role in walking than what has been thought so far. She considered the cord nerve cells akin to the memory cells in brain, which can 'remember' even when their connection to the brain is severed. The only way to test this was to try and make paralysed people move with their severed spinal cord, through a fine-tuning process. And this she tried out in patients with 'clinically complete spinal injury' - those in whom there was no control over their bodies, at least from the waist down.

For Harkerna, the tricky part was to ensure that the spinal cord gets sensory input required for any movement of the legs. With colleagues' help, she achieved this by suspending the patients over the treadmill in a contraption somewhat like a parachute harness. With a trainer to assist, the patients tried stepping motions - extending their legs and retracting them repeatedly. This ensured that the spinal cords got the desired sensory messages for the movement.

Over the next few months, all seven patients developed rudiments of walking, although they were unable to balance properly. They were able to bear their own weight and step on the treadmill without any support. They, however, could not 'feel' the position of their joints or the speed of treadmill. Their spinal cords have just begun to recognise the signals sent by their legs and respond appropriately to keep the movement. The researchers tracked the nerve impulses through electrodes implanted in the patients legs. When they recorded the electrical activity in the muscles they found out that when the movement was fastest, electrical activity 'seemed' normal. This means the spinal cord is able to generate the appropriate feedback once it recognises the sensory impulses associated with normal limb movement. Moreover, the improvements were permanent with all seven participants showing improved level of performance. Harkerna now feels that soon the patients will gain voluntary control over their lower limbs. To silence their critics, the UCLA group is testing the technique in people with partially severed spinal cords to rehabilitate them.