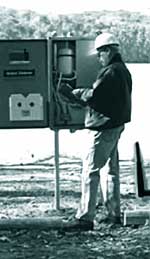 researchers at the us Department of Energy's Oak Ridge National Laboratory (ornl) have developed a technology to immediately determine a poisoned water supply system. Named AquaSentinel, the technology detects toxins in a municipal water supply system by analysing the condition of the algae it contains.

Algae are common inhabitants of surface waters and are found in water supply that is exposed to sunlight. They are sensitive to toxic chemicals. When algae absorb light, not all of it is converted into energy, some is converted to heat and some is released as light, which shows up as fluorescence. AquaSenitel is based on measuring fluorescence of the algae present in the water, according to an ornl press release.

Explains Eli Greenbaum of ornl's Chemical Sciences Division, "Depending upon whether the water is healthy or it has been exposed to poison, the fluorescence signature changes. It is that change in signature that we use as the detection method for detecting the presence of chemical agents.' According to Greenbaum, toxins such as cyanide, pesticides and herbicides can change the fluorescence of algae in predictable ways.

AquaSentinel is a continuous water monitoring system, which can examine water supply 24 hours a day, seven days a week. The data can be transmitted to a central monitoring station to provide an early warning system.