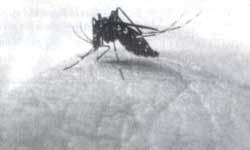 WHAT is common to syringes and mosquitoes? Both, to a point, perform similar functions: piercing the skin and drawing blood. But syringes, unlike mosquitoes, do not infect us with diseases. Malaria, filariasis, dengue... spread thanks these winged pests. However, researchers are now trying to genetically alter mosquitoes so that they become incapable of transmitting these diseases. The researchers think that some day, by manipulating the genes of mosquitoes, they might be able to eliminate mosquito-borne diseases once and for all.

Frank Collins and his colleagues from the University of Notre Dame, in Indiana, USA, have recently reported a new method to insert genes into a mosquito which are inherited by its off-spring (Proceedings of the National Academy of Sciences Vol 95, No 7).

Malaria and dengue fever, diseases that claim millions of lives around the globe each year, are spread by these disease-carrying mosquitoes. And so far scientists have not been able to develop an effective vaccine for either of the diseases. According to Collins, genetic manipulation of the Aedes aegypti (A aegypti ) mosquito the species which transmits dengue and malaria-might render the insects incapable of transmitting the malaria parasites. In their test case, Collins and his team used transposablc gene elements to spread genetically-directed changes in eye colour through succeeding generations of mosquitoes.

These "transposon" elements are small deoxyribose nucleic acid (UNA) sequences that reside in the genome of most organisms. Sometimes they are referred to as "jumping genes". Transposons are able to detach themselves from one genetic location and insert themselves into another. At the same time, this move necessitates the creation of a copy of the transposon to fill the gap left behind. This means that potentially thousands of copies of this gene can be created in a single individual. If a mosquito, saturated with transposons, mates with another that lacks these "jumping genes", all the off-spring will have half the number of transposons present in the first mosquito, the researchers conclude. This means that transposons can effectively propagate in a way that drives them through a population, so that ultimately every member is full of transposons.

When the researchers introduced an eye-colour gene into A aegypti mosquito embryos, they discovered that the insects took on the transposon-directed eye colour for at least the next 10 generations.

Scientists say that if the technique works with characteristics such as eye colour, it should work for genes which hinder the mosquito from harbouring the malarial parasite. The long range goal of the group will be to drive such anti parasite genes into the natural population of mosquitoes.

Collins believes transposon techniques would not be "an exclusive (disease) control strategy, but rather a new method to be used in conjunction with anything else that may be effective or partially effective". Public health officials blame the resurgence of malaria worldwide on the increasing resistance of mosquitoes to insecticides, and on growing resistance of the malaria parasite to many of the drugs used to treat the disease.

Collins's work is just the first step on the long road towards engineering disease-resistant mosquitoes, says Becky Wattan, a biologist at the University of Arizona, USA. The next step will be to home in on the mutation that knocks out disease transmission and "rig" it so that it spreads through populations of mosquitoes. Recently, another team of researchers has identified a naturally-occurring chemical in the mosquito vector of the malarial parasite. The parasite must have this chemical in order to develop, say these researchers. This chemical is the xanthurenic acid, and is essentially a by-product of the biochemical pathway that produces eye pigmentation in the mosquito. Malarial parasites might find the mutant mosquitoes, which are unable to make eye pigment, unsuitable hosts for their growth and development. Deprived of the chemical they need, the malarial parasites would not be able to breed. (Nature, Vol 393, No 6673).

Howard R Morris and colleagues at Imperial College, University of London, were following up earlier clues that suggested an important chemical component in the regulation of the malaria life cycle. When mosquitoes alight on an infected human for a blood meal, they ingest human red-blood cells infested with malarial parasites in the so-called "gametocyte" stage of their complex life-cycle. Within seconds, the parasites undergo a change called "gametogenesis", transforming themselves into sex cells and break out of the red-blood cells.

These sex cells unite and then produce asexual stages called sporozoites. It is these sporozoitcs that the blood-hungry mosquito injects into the next human it meets. These develop further, invading red-blood cells and becoming gametocytes, and then the cycle is closed. What causes the instant transformation that is gametogenesis? The sudden drop in temperature, from warm human to relatively cool mosquito, is an important factor. Experiments have also shown how a sudden drop in acidity can also stimulate game-togenesis but this sudden drop does not usually occur inside a mosquito, so there must be another factor. After a lot of patient searching, xanthurenic acid appeared to be the key. Right now, research is on to unravel the mystery. It should soon be possible to create strains of mutant mosquitoes with a similar trait and release them into the wild.