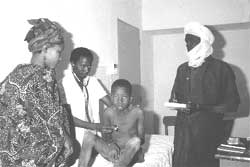 Artemether, the drug used as the last line of defence against malaria is being widely used in Africa. But experts have cautioned that the drug should not be used until resistance to the traditional drug, quinine, becomes ineffective. By prescribing Artemether - mainly to wealthy patients - even before testing the effectiveness of quinine on patients, doctors in Africa are undermining the effectiveness of the last resort to combat malaria.

Many malaria experts want to hold Artemether in reserve until quinine begins to fail. "While quinine works, we should still be using it," says Oladapo Walker of the World Health Organization's malaria research unit at Parientyatwa hospital in Harare, Zimbabwe.

Artemether is derived from the Chinese shrub wormwood. Injected into the muscle, it can treat cerebral malaria caused by the Plasmodium falciparum parasite.In Southeast Asia, where quinine resistance is widespread, Artemether is the leading treatment for this often fatal condition.

At a meeting of the Global Malaria Group, a body trying to improve coordination of research on the disease in London, it was revealed that in almost every African country, Artemether is already on sale. "We were very angry when we found out that this was happening," said Kevin Marsh, director of the Wellcome Trust research laboratories in Kilifi, Kenya.

In January next year, researchers led by Paul Garner of the Liverpool School of Tropical Medicine will release new analysis of all the published trials of quinine and Artemether. Piero Olliaro, head of malarial drug research and development at the Tropical Diseases Research Programme in Geneva says that if Artemether is shown to be more effective than quinine, there would be even more reason to use it.