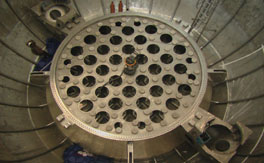 The Civil Nuclear Liability Bill, 2010 that got approved in Lok Sabha on Aug 25, 2010 after government dropped the controversial provision on "intent" as a precondition for holding suppliers liable for a nuclear accident caused by defective equipment.

The Civil Liability for Nuclear Damage Bill, 2010 aims to provide a civil liability for nuclear damage and prompt compensation to the victims of a nuclear incident through a nofault liability to the operator, appointment of Claims Commissioner, establishment of Nuclear Damage Claims Commission and for matters connected therewith or incidental thereto.