Dams and malaria in Africa: time for action 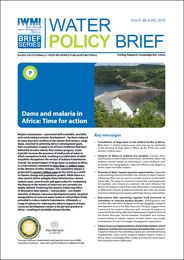 Malaria transmission – associated with morbidity, mortality and constraining economic development – has been reduced by more than 40% in Africa in the twenty-first century. Large dams, essential to achieving Africa’s development goals, have nonetheless created a set of local conditions that have defied the broader twenty-first century progress. Dams typically increase the presence of small pools of water in which mosquitoes breed, resulting in proliferation of adult Anopheles mosquitoes; the vectors of malaria transmission. Overall, the annual impact of large dams on malaria in Africa is conservatively estimated at more than 1.1 million cases. In the absence of other changes, this cumulative impact is projected to exceed 2 million cases by the 2050s as a result of climate change and population growth. While there is a clear need to better mitigate these infrastructure-driven malaria cases, several tools and approaches for combatting the disease in the vicinity of reservoirs are currently not widely utilized. Predicting the malaria-enhancing effect of alternative dam options – now possible – can enable selection of disease-conscious development paths. Targeted manipulation of reservoir water levels at critical times holds potential to reduce malaria transmission. Ultimately, a range of options for reducing the adverse impacts of water resources development remain to be put into practice in Africa – resulting in avoidable disease burden.