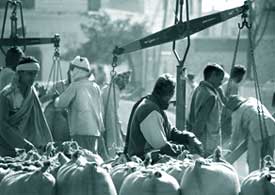 The Seeds Bill 2004, which aims to replace the Seeds Act, 1966, is with the Indian Parliament. It is a bone of contention. Between interests of farmers and the private seeds industry. Parliament’s standing committee on agriculture is looking into this bill, drawing widespread criticism for favouring the seed industry and compromising the interest of the farmer.

The Left parties that support the United Progressive Alliance (upa) government at the Centre have condemned the bill and openly say they will not let it pass in its present shape. S Ramachandran Pillai, politburo member of the Communist Party of India (Marxist) and general secretary of the All India Kisan Sabha, has written a scathing critique on the bill. Social groups and individuals who campaign for farmers’ rights condemn it as anti-farmer.

For their part, seed companies aren’t too happy either, especially smaller companies. They fear the large corporations will completely dominate the market if this bill is passed. Farmers’ groups have objected on either side, depending on their leaning. The most contentious issue is farmers’ customary access to seeds. The bill, it is alleged, fails to hold the seed industry accountable, while trying to control farmers’ rights. It will either supersede or destroy the effectiveness of laws like the Protection of Plant Varieties and Farmers’ Rights Act, 2001 (ppvfra) and the Biological Diversity Act, 2002 (bda). And if that wasn’t enough, it ignores certain key policy recommendations of government’s own committees.

Commission and omission
For more than three decades, the Union ministry of agriculture (moa) has tried hard to forget that an amendment was needed to regulate the private seed industry, especially since the Indian seed industry had started growing rapidly in the 1990s due to liberalisation of the sector. When the 1966 law was framed, the private industry was virtually out of the picture. Hence it has no provisions to regulate private seed companies. At present, seed inspectors who draw samples of private sector seeds do so under the Essential Commodities Act, 1955. If farmers complain of failure of private company seed due to poor quality, they have to seek compensation under the Consumer Protection Act, 1986. The Seeds Act 1966 has no role in either the company-government relationship or the company-farmer dealings.

The first official reminders came from the Seed Review Team of 1968 and the National Commission on Agriculture in 1972. In 1987, moa set up the Expert Group on Seed. Its 1989 report said: “The Seeds Act, 1966 may be amended to make registration of varieties compulsory, without which sale of seeds should not be permitted. However, farmer-to-farmer exchange, as envisaged in section 24 of the Seeds Act, 1966 will be exempted from the application of the proposed provisions.” In 1995, moa created a Seed Policy Review Group. Its 1997 report says: “It is a matter of concern that most of the well-considered recommendations of the Expert Group on Seed (1989) are yet to be acted upon”. It took moa another five years to release the National Seeds Policy 2002. In 2003, work finally began on a draft to amend the Seeds Act, 1966.

The Seeds Bill, tabled in Parliament on December 9, 2004, brings private seeds companies within the ambit of the seeds law. It provides for the creation of a national register of seeds, and requires all companies selling seeds in India to register themselves and the varieties they sell. This is supposed to make them accountable for the quality of seeds they sell to farmers and to put a check on the sale of spurious and poor quality seeds. It is also supposed to provide compensation to farmers who lose their crop due to poor quality of seed they purchase from private seed companies. The bill also aims to liberalise import and export of seeds and planting materials to attain compatibility with World Trade Organisation commitments.

The big question that haunts the bill has to do with farmers’ customary rights: will farmers continue to enjoy the right to freely distribute, barter and informally sell seeds saved from their crops, as they have done for centuries? Since the beginning of human settlements, farmers have innovated to adapt wild plants (called land races) into plant varieties with more desirable traits