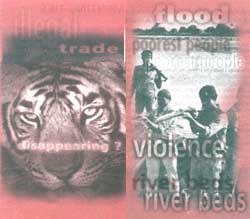 Small may be beautiful, but not in terms of the bounty. The larger the project, the bigger the "10 per cent" cut allegedly paid as a bribe to politicians and bureaucrats by the contractors. To secure a deal, a contractor pays the signing authority a certain cut from the money sanctioned for the project. The remaining money is pocketed by the contractor and very little is actually spent on the project.

In Bihar, some 3,400 km of embankment has been constructed at the cost of Rs 375 crore in the last 34 years. And Rs 475 crore is said to have been spent on annual repair and maintenance. In this same period, the flood-prone area in the state shot up from 2.5 million hectares (m ha) to 6.4 m ha.

It is now well known that embankments exacerbate the intensity of the flood. The river bed rises as a result of siltation, and there is increasing drainage congestion of the flood plains (see box: Changing course). However, the multiplying costs of construction and repair over the years have built up a politician-engineer-contractor nexus.

These people share a strong vested interest in "development" projects, particularly since embankments can get washed away in the floods. It is often said in Bihar, one of the most corrupt states in the country, that the final payment for the embankment is given the day the contract is awarded. The work is not even undertaken. Because it can always be argued it got washed away in the subsequent monsoon season. In this scenario it is impossible to even hope that alternative flood control policies will be seriously discussed. There is so much money in what is happening now (see box: Permanent job).

IN THE NAME OF THE POOR
The official loot of the treasury can have equally adverse effects on the environment. Government subsidies have been considered necessary to support the poor and meet vital national goals like self-sufficiency in food. But subsidies given in the name of the poor have usually benefited the rich. For instance, subsidy on diesel for irrigation provides cheap fuel to run luxury cars (see box: Robbing the poor).

Even the relative importance of different subsidies has also changed over the years. Food subsidies which accounted for 70 per cent of total explicit subsidies had declined to 40 per cent in 1995-96 as compared to the previous year. And in 1994-95, the Centre spent more than five times less money on "merit" goods - necessary for social justice and equity - than what it did on "non-merit goods".

FAR AND WIDE
In a bid to protect the global environment, various countries have forged environmental treaties relating to protection of the ozone layer, global biodiversity and endangered species. Corruption can affect the successful outcome of several of these treaties, as in the case of the Indo-China tiger conservation programme (see box: Species at stake).

The smuggling of chlorofluorocarbons (CFCs) is another happening which threatens to jeopardise the Montreal Protocol. An estimated us $500 million worth of CFCs were smuggled into the US in 1996. It is alleged that CFCs manufactured in India, China, Mexico - developing countries are allowed to continue manufacture of CFCs under the pact - are finding their way to the industrialised world. Although the us has stopped producing or importing CFCs, it has not banned the sale or use of the compound made before the 1996 deadline. The exemption, meant for the servicing millions of on-road cars which use CFC air conditioning, has encouraged a black market to flourish. Smuggled CFCs are passed on as recycled CFCs. While there is no evidence to link Indian industries to the illegal trade, it is suggested that CFCs manufactured in India and exported to licensed dealers or industries as per the guidelines of the Montreal Protocol makes its way to lucrative markets in North America and Europe. Russian manufacturers are said to be deeply involved in the illegal CFC trade.