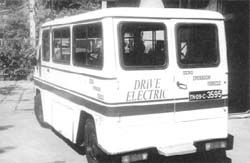 Although the technology can of be immense value to a developing country like India, the r&d of fuel cells is still at its infancy in the country. "We are still at the familiarisation stage," says an official from the mnes. In Hyderabad, bhel is working on the development of 50-kilowatt phosphoric acid fuel cell (pafc) power units.

The Chennai-based spic Science Foundation (ssf) has developed India's only vehicle powered by a polymer electrolyte membrane fuel cell (pemfc). It is operating with financial aid from the mnes."pemfc is shown to be suitable for electronic vehicle (ev) application," says P Sridhar, assistant director, ssf. "We believe that batteries may be required for initial acceleration, while cruising power can be drawn from the fuel cell. The concept is to use fuel cell as a range extender of the present battery operated evs," says he. But the 12-seater van charting the streets of Chennai is hardly a patch on the fuel cell vehicles operating around the world - its maximum speed is 50 kmph. There are only nine scientists and engineers working on it, and the fuel cell and the batteries used in the vehicle are extremely heavy; just the battery weighs 600kg. "Besides, the proton membrane used as the electrolyte costs as high as Rs 4 lakh per stack," says Ramkumar Perumal, senior research engineer at ssf.

After arranging financial aid of us $297,000 (about Rs 1.2 crore), the Global Environment Facility (gef) is undertaking feasibility studies of commercialisation of fuel cell buses in India. Usha Rao, gef consultant who is working on climate change, says, "Delhi has been selected for this project because of its high pollution level." She points out that depots have been identified in Delhi for setting up infrastructure to run fuel cells buses. Till the time hydrogen fuel is available, the depots will have reformers to extract hydrogen from compressed natural gas (cng). Ashok Leyland, a major manufacturer of buses in India, is a stakeholder in the project. "As fuel cells are large, heavy and expensive, it is more practicable to apply them to large vehicles like trucks and buses," says Vidya S Batra, research associate at the Tata Energy Research Institute (teri), who is currently working on what is called the molten carbonate fuel cell (mcfc). This means that fuel cell-powered cars are a long way away in India.

But it's not all hopeless. "There are two factors in favour of fuel cell development in India," says an official at the ministry, "The first is the pollution reduction drive and the other is the high cost and poor availability of oil." The caustic soda industry is the main source of hydrogen, which forms 40 per cent of its byproduct. A few institutions, including the Indian Institute of Technology in Delhi and the Banaras Hindu University in Varanasi, are working on the production of hydrogen.

Waiting for the miracle
A few conclusions can be drawn from the fuel cell scenario in India.

l No clear setting of priorities.

l No identification of gaps to focus research areas.

l Research is focused on using cng or petrol, rather than developing ways to produce hydrogen at lower cost.

The real fuel cell revolution will occur only when prices are slashed. "The price has to reduce drastically to compete with the petrol-driven vehicles," says A Prabhakar Rao, general manager in charge of corporate r&d at bhel. At present, fuel cell vehicles cost ten times more than petrol ones. The figure is 15-20 times in case of buses. Viswanathan says there are plans to slash prices to one-tenth by 2002. Currently, fuel cells come in large sizes and prohibitive prices, making marketing impossible on a large scale. Until more affordable replacements are used, the market entry remains a dream.

"At present, there is no organised infrastructure," says Batra of teri."Hydrogen, the main fuel, is applicable only in liquefied or compressed form," says Batra. "At ordinary temperature and pressure, hydrogen occupies a lot of volume," explains Viswanathan, "and as it has to be compressed and stored at high pressure, high-strength materials are required for storage." Besides, hydrogen supply is limited as it is not readily available in several countries.

If methanol is used instead of hydrogen, it requires an on-board reformer to convert it to hydrogen. This will further increase the weight and increase the possibility of trace emissions. Platinum, which acts as catalyst in the chemical reaction, is expensive. Almost every manufacturing company is working on ways to reduce the cost.

The hour's need
A proper infrastructure, good fuel supply and distribution network are essential, says C K Subramaniam, senior scientist at ssf, Chennai. "The cost and weight of fuel cells can be reduced by using better bipolar plates," says Krishnan of bhel. He also states that efforts have to be made to improve the cell's life. He suggests that India should have a well-defined ethanol or methanol programme like Brazil along with a clear energy policy. Says Viswanathan. "First of all, India has to pay a lot of attention to training and maintenance. The investor cost also needs to be drastically reduced through the latest technology."

But what about the hydrogen fuel supply, the cleanest alternative? Says Prabhakar Rao, "The short-term solution is petrol reformation to hydrogen." He feels that the hydrogen supplied by the caustic soda plants is insufficient. Subramaniam asserts: "The misconception about hydrogen being explosive in nature has to be erased. People need to be convinced that it safer than petrol as its operating temperature is 60