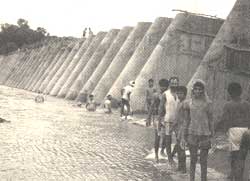 ABOUT 60 km from the historical town of Bijapur is a latter-day human-made wonder - the Chikka- padasalagi barrage. This half-km long dam on the River Krishna is testimony to the collective will and undaunted efforts of the people from 21 villages around the Jamkhandi taluk of Karnataka's Bijapur district.

The municipal corporators of the nearby Jarnkhandi town had earlier submitted a proposal to the Karnataka government for a similar barrage to supply drinking water in 1967. Nothing happened for 11 years. Then finallv, an expert committee recommended Chikkapadasalagi as the ideal site for the barrage. But the government felt there was no point in going ahead with the project 5ince the larger Upper Krishna Project (UKP), being built further down the river, would submerge such smaller barrages.

That's when the farmers decided to go ahead on their own. They:sked their leader and director of the Jamkhandi Cooperative Bank, Siddu B Nyame Gowda, to help them.

The Idea appeared outrageous. at first. A private barrage on agovernment-owned river? But when a young engineer and small-time contractor, Ashok Tungal, made a rough estimate and said that the project would cost anywhere between Rs 75 lakh and Rs 85 lakh, the villagers felt it was within their reach.

Altogether, there were some 1,400 farming families owning agricultural pump sets with a total capacity of 13,000 hp. There would be enough funds for the project if each paid Rs 500 per hp. The idea was all the more feasible because their investment could be recovered in just one year if the 10,530 ha of land over a 42 km-longstrIp of the river's banks was provided adequatewater.

An umbrella organisation, the Krishna Teera Raitha S-angha (Krishna Ri verbank Farmers' Association or the KTRS), was set up in 1987 to oversee the construction of the barrage" The local MLA was made chairperson so that he could lobby for the project at the government level. Unfortunately. the bureaucrats in Bangalore didn't seem the least concerned.

Among other conditions, the government stipulated that the cost of the entire project be borne by the farmers; that a detailed project plan should be approved by the PWD; that the barrage. once completed, would be handed over to the government; that the beneficiaries should pay tax for the water consumed; that they should never claim any compensation for the submergence of the barrage once the UKD was completed: and, that the construction be handled solely by the PWD. The KTRS. eager to go ahead, agreed to all the conditions except the last one. "Leakage of funds now, and leakage of water later. We don't want PWD s~pervision." said the farmers.

Much robbying later. work began. Tungal, with the help of a retired chief engineer, L T Amminbhavi of Dharwar, procured the construction material. Nyame Gowda worked to raise funds, while some farmers. under the guidance of Hanmanta Shirahatti, began to enlist manpower, especially from among the poor and marginal farmers who could not pay cash. But there was a monetary setback. Steel prices had shot up and the project cost had to be revised to Rs 94 lakh. Also, the government's promised Rs 25 lakh had not,come. Only 60 per cent of the estimated 1,400 families had paid their promised share of money.

Undaunted, Nyame Gowda and his friends went around raising funds. Some farmers came forward to pledge their land and raise loans. While the Bijapur zilla parishad (ZP) refused to give a single rupee to the project, despite the fact that 21 villages under its administration were to benefit from the barrage, the neighbouring Belgaurn ZP decided to contribute Rs 5 lakh, although just six of its villages would benefit.

The Jarnkhandi Urban Bank offered loans to farmers involved in the project. Bank employees donated one day's salary to the cause. CAPART, the Delhi-based government funding agency, volunteered a loan of Rs 60 lakh. It was a tempting offer, but the KTRS decidea to borrow only Rs 28 lakh.

In December 1990, the barrage finally emerged out of the Krishna waters as a symbol of people's power. It had taken them just one year to complete a task which would have taken the PWD five years and Rs 3 crore.

All farmers in the area now have access to water from the barrage. Those who want to instal pumpsets have to pay.the KTRS Rs 300 per hp. Most of them recovered their investments within a year, some have even made further investments on their land.

Kiran Gowda Patil of Nandgaon village in Athani taluk has laid six km of PVC pipeline to draw water and is now talking of making "double profits". Many farmers whose land is at an altitude have installed booster pumps. Bhagwant Siddoji, who was struggling to grow jowar in his 1.6 ha plot all these years, is now growing sugarcane, plantains and sunflowers.

40 Raju Nyamagowda, who until now had to be content with growing dryland crops on half his land, is now irrigating his entire holding of 12 ha. He has already purchased a tractor and is now experimenting with corn, wheat and, groundnut.

The legal status of the barrage is not clear. Though the structure was to have been handed over to the government, no move has been made in this direction so far. The Virendra Patil ministry has paid the KTRS the Rs 25 lakh promised it by the Hegde government. The gesture, although belated, has helped the KTRS clear its debts.

The water glut has brought with it its own set of problems. Since electricity is free, many don't bother to switch off their pump sets. A few overenthusiastic farmers are already facing the problem of waterlogging and salinity is bound to creep in soon if nothing is done.

Another more intransigent problem has been caused by a change in cropping patterns. Most farmers here have given up cultivating traditional crops like jowar and pepper. Sugarcane is the new favourite since it is easy to cultivate. But selling it is a problem because there are no buyers. The sugar factories in the region are choked with sugarcane stocks.

But the KTRS is undeterred. In the 1991 elections, Nyame Gowda trounced Hegde to become a Union minister and this has boosted the confidence of the association. With Rs 20 lakh left over from the barrage project, the KTRS has to now mobilise 10 per cent of the total capital itself, while public funding will look after the rest.