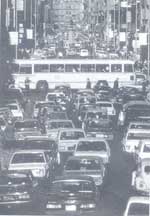 WESTERN NGOs and media built up certain myths about the South in the run-up to Rio. These perceptions then clouded the visions of numerous Northern negotiators.

Myth: Rio is suffering from a North-South conflict and this will contribute to its failure.
Reality: In reality, the North-South conflict was secondary to the conflict between the US, which did not want to commit itself to hard ecofriendly steps, and the European nations. The South did not stop any industrialised country from imposing cuts on its carbon dioxide emissions nor did it ever say that it is not prepared to conserve its biodiversity. But the failure of the industrialised countries to harmonise their own positions often got glibly transformed into a North-South conflict, as an explanation for their own failure.

Myth: The South came with overheightened expectations of money and technology, and this contributed to Rio's failure.
Reality: The South went more with fears than expectations to Rio. The South had fears that the Rio process would end up with its energy consumption levels being frozen at the current inequitious levels without the West accepting limits commensurate to its responsibility for the problem; that biodiversity conservation would become a convenient excuse for free access to this critical resource; and that its sovereignty over its forests would diminish to save the world's climate. The South was looking for more "negative gains" (in terms of not losing too much) than "positive gains" in Rio, as one Third World delegate put it.

Myth: Rio is becoming a cheque-book writing exercise.
Reality: The Western media and politicians consistently made this statement to deride the South. But the South was only saying that Rio is a bill-paying exercise. Having accumulated all these ecological bills, it is high time that the North started paying them. But Jonathan Poritt, a leading British environmentalist and a founder of his country's green party, admitted in a radio discussion that this perspective never cut ice with the western public.

Myth: God knows, we must take them along with us. We cannot save the world without them.
Reality: This statement made by several northern NGOs is about the most patronising and preposterous in the context of Rio. In fact, given the enormity of the North's contributions to global environmental problems, it should be southern government and NGOs which should be saying in exasperation, "God knows, we must get some sense into their heads. We cannot save ourselves or the world without getting them to join us."

Myth: What good is it our trying to save the earth if they follow in our footsteps? By 2025 they will be emitting so much carbon dioxide that despite all our efforts, we can kiss the atmosphere goodbye.
Reality: Among numerous others, Greenpeace pushed this argument hard and again, amongst others, BBC commentators repeatedly raised this point. Apart from the morality of hanging the South for a sin it is likely to commit three decades later, isn't it true that most of us in the South (barring, of course, our elites), including leaders like Mao, Nyerere and Gandhi, always knew that the world could never sustain the living standards of the North! Now if the North realises this too, instead of preaching to and enforcing new rules on the South, should it not set an example by changing its own mores sufficiently enough to leave some environmental space for us? This would provide an excellent base for those who argue for changed lifestyles in the South.