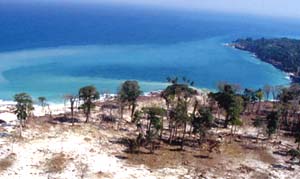 The monitoring and management of the Indian coastline has come under sharp focus after the tsunami disaster. There is now a strong demand to implement the Coastal Regulatory Zone (crz) notification of 1991. Let us look at why protecting coastal ecology is so critical.

Natural protectors, such as sand dunes and mangrove forests, were formed over centuries. Sand dunes were natural bulwarks against strong sea winds, high waters and in emergencies, tidal waves like the tsunami. But tourism pressures have destroyed them everywhere, with sand dunes being flattened to provide hotels with extra beach cover or an ocean view. Mangroves, the tiny forests along the coastline, holding rich nutrients of the land and the sea and home to a variety of marine life, are extremely crucial as they cushion the impact of tidal waves. This unique ecology has now been disturbed, and in many places even cut down, against all regulations. One of the biggest violators has been the government of India, which has sliced through the heart of the mangrove clusters in Goa and Karnataka to take the Konkan railway through. Natural ecology along the coastline must be left undisturbed and wherever destroyed, must be restored on a priority basis. Like building codes in earthquake areas, implementing coastal zone regulations properly and fully will help mitigate future disasters from the sea.

Andaman and Nicobar
The Andaman and Nicobar (a&n) islands form one-fourth of India's coastline. The islands are biodiversity hotspots, with a variety of endemic species of flora and fauna. They are home to ethnic communities which date back to prehistoric times. The islands are also in a seismically active zone. During 1989-1998, an earthquake rocked the region every six days (a total of 614). Even a tsunami hit, with amplitude reaching 1.04 metres, was recorded on December 31, 1881.

Off the disaster map
Given these issues, disaster management for the islands should have assumed top priority. As we are discovering to their cost, penning down a disaster mitigation plan is no guarantee against crises unless they are also implemented. Even the existing plan does not adequately provide for emergencies.

Far from admitting to this lacuna, the authorities' energy is focussed on playing down these issues. "It is wrong to assert that the administration did nothing for disaster management. We were certainly prepared to face any situation,' avowed V V Bhat, chief secretary of a&n administration. These preparations, which cost them most of the Rs 1.50 crore allocated for Natural Calamity relief in a&n (under the 10th Five Year Plan, 2002-2007), were confined to conducting a few earthquake drills in schools and buying 15 tents, tarpaulin and some cooking vessels, not enough even for a single village that is hit.

The tsunami disaster has shown up these grandiose statements for what they actually mean. The islands got the brunt of it: body toll, 1,310. All but three of 15 villages of the Car Nicobar region were flattened. The ecology was not spared either. "It will take at least 1,000 years for the islands' corals to recover from the tsunami destruction,' says Ajoy Bagchi, executive director, People's Commission on Environment and Development, New Delhi.

Island ecology eroded
Corruption has washed away a centuries-old natural method of disaster management. "About 10 per cent of the tsunami impact could have been absorbed by the now non-existent mangroves and sea beaches,' says Sameer Acharya, secretary, Society for Andaman & Nicobar Ecology, a non governmental organisation (ngo) based in Port Blair. Ironically, after the tsunami, the Supreme Court (sc) has revised its earlier ban on tree felling in forest areas and allowed the administration to use timber for rehabilitation work.

Three years ago, 84 per cent (or 6,930 sq km) of a & n was covered by forests (State of Forest Report 2001, Forest Survey of India). This may seem like a lot, until you see that in 1999, the forest cover was 99 per cent (7,606 sq km). In just two years, 676 sq km of forests were lost. In particular, the mangrove cover has steadily declined since 1997: by 2001, only 0.14 per cent of the total area (789 sq km) was under mangroves. Even here, the actual extent of mangrove degradation cannot be gauged, due to conflicting reports. The State of Forest Report, 1997 puts the mangrove cover as 686 sq km, but the islands' environment and forests department says it was 233 sq km. Meanwhile, a study by the Middle Andaman forest division, based on analysis of satellite images, indicated an even lesser mangrove cover: 130.6 sq km in 1997-1998.

What is clear, however, is that mangroves have been systematically destroyed to establish settlements and fulfil the needs of the timber industry. The government subsidises this destruction: a 90 per cent subsidy for transport of goods and a 80 per cent plus power subsidy. Between 1991 and 2001, total subsidies to industry have grown from Rs 208.57 lakh to Rs 411.23 lakh in 2000-01. The importance of mangroves can be underlined by the fact that many relief workers in tsunami-affected areas now report that areas with mangroves or any other natural barriers, like Pondicherry, have incurred less loss in life and property than Nagapattinam and Cuddalore, where the Tsunami waves went through the low lying areas that were occupied by settlements instead of forests. "There should be some kind of a planned development, there should be some kind of a law enforcement in terms of what region to be occupied even in the coastal region,' says V Rajamani, a seismological scientist based in Chennai.

Systematic violations
India has a long coastline stretching over 5,700 km, exposed regularly to tropical cyclones arising in the Bay of Bengal and Arabian Sea. The Indian Ocean is one of the six major cyclone-prone regions of the world. In India, cyclones usually occur between April and May, and also between October and December. The eastern coastline is more prone to cyclones and 80 per cent of total cyclones generated in the region hit here. The average coastal population density is 432 persons per sq km as against 256 persons per sq km for the entire country. Therefore, it is crucial coastline areas have a specific, well-managed system to combat disaster.

In 1991, the moef (Union ministry of environment and forests ) notified the country's coastal stretches as coastal regulation zones, with most of the a&n coastline being designated crz-iv . The coast was divided into four zones:

 Islands and estuaries: to be left alone except for national security measures

 Areas 200 metres from the shore, to be kept free for waves

 No new construction was to be permitted within 200 metres of the high tide line (htl).

The crz also sought to regularise the population and commercial pressure on the active play zone of the sea waves.

These regulations have been blatantly violated. In fact, since its notification in February 1991, it has been amended nine times, virtually diluting its original restrictions. Sand mining is rampant in the Car Nicobar region despite an sc directive on May 7, 2002, stipulating that commercial sand mining be reduced in the union territory. In 2003 alone, more than 20,000 million tonnes of sand were lifted. Destruction of beaches has led to waves entering settlement areas and causing extensive damage to crops. Sand mining has also aggravated the impact of tsunami as sea and land distances came down.

In June and August last year, the Chennai Metropolitan Development Authority permitted construction on the beach on Coastal Road in Besant Nagar despite protests from local residents. Construction activity in violation of the crz continued till the tsunami washed away all constructions killing around 100 labourers. "That is the kind of impact we will have in the future if we don't stop this blatant abuse of the coast,' says T Mohan, an environmentalist in Chennai. Similarly, the crz notification was relaxed to permit the prototype fast breeder reactor at Kalpakkam when environmentalists raised objections to it, citing violation of the crz. The plant was inundated by the tsunami.

Says Mohan, " crz has been more violated than implemented.' In fact, even traditional fisherfolk, badly hit by the tsunami and forming 90 per cent of the total dead, are now clamouring for its strict implementation. " crz was diluted to make ways for insensible development which ultimately paved way for our destruction,' says Thomas Kocherry, chairperson, National Fishworkers Forum (nff). nff has been demanding strict implementation of crz for years. "All along the sea coast on the west and east of the country, wanton construction was allowed killing natural barriers like mangroves', says Kocherry. In the 1980s, the mangrove forest was 6,740 sq km, which has come down to 4,120 sq km. nff moved the sc against crz violations and got two favourable orders asking the central government to stop aquaculture, implement crz.

Despite the enormous need to implement these regulations, crz has been mostly abandoned. In April 1996, the sc directed the state governments to prepare the coastal zone management plans and get them approved from the moef within three months. Despite this, no initiative was taken to develop coastal areas. Instead, an moef committee is reviewing crz. The government's commitment can be gauged from the fact that even the draft National Environment Policy, 2004 (nep) is trying to revisit the existing coastal protection plans to make it more tourism-oriented.

Over the last 13 years, since the notification was enacted by the Union ministry of environment and forests, there have been enormous pressures on the coastal zone. In many cases the ministry has made the changes through a number of notifications that have come up since 1991 (see box: Breaking the rules). These notifications have allowed various uses including oil exploration and the setting up of a desalination plant. Institutional planning and management of these regions are weak and non-functional. But now they may be reconstituted, given the pressure from tsunami-hit states for strict implementation of the crz.

If that happens, new coastal management policies must emphasise the issue of livelihood security of poor fishing communities. Good coastal management needs the involement of all stakeholders, from organisations of coastal villagers to industry and facilitators like conservators, environmental ngo and scientists.