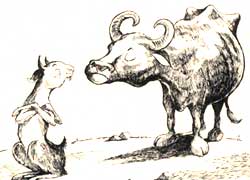 IN a semi-arid environment, keeping goats is considerably more rational for the local people than rearing buffaloes, according to a field study done in the degraded lands of Tilonia in Rajasthan. The results of the study are quoted in the report of the task force that evaluated the impact of sheep- and goat- rearing in ecologically fragile zones.

As a result, goats produce 6,000 litres of milk, while buffaloes produce only 2,500 litres. Although buffalo milk fetches a higher market price, the total value realised from the sale of goat milk would be 60 per cent more than that from buffalo milk. The highly prolific goats can produce as many as 42 kids in the four-year period, whereas the buffalo can produce only two calves. The sale value of these calves is only half that of the goat kids.