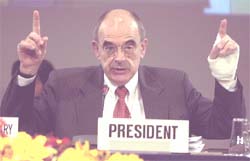 For the first eight days, negotiations went exactly as expected.

After at least two previous climate conferences that followed a predestined script, the outcome of the sixth conference of parties (CoP-6) to the climate change convention, held in The Hague last month, seemed as predictable as a soap opera. The cast had their cues right. The European Union (EU) came with a position that showed some environmental integrity. The US and its allies (a loose grouping of Japan, Canada, New Zealand and Australia, known as the ‘umbrella group’) came with a list of unreasonable demands and threats to withdraw from negotiations if these were not met. The UK was eager to mediate between the EU and its favourite first cousin, the US. The court jesters, the G77 group of developing countries, were happy to have their attention diverted from serious issues, and to juggle instead with their favourite toys, technology and financial transfer. The stage seemed set for the inevitable disaster in the last act, when the EU would give in to the US. Another climate meeting would end up serving the economic interests of the US more than the threat of global warming and climate change. Many observers cringed at the expectation of yet another climate farce.

Luckily for them, this particular farce had some very interesting twists in the end.

unwilling to give in at the last minute as it has done so often in the past, the eu stood its ground on the crucial last day, refusing to accept a diluted agreement. The chairperson of the meeting, Dutch environment minister Jan Pronk, extended the meeting by one day in the hope of some compromise. The uk , represented by deputy prime minister John Prescott, offered a compromise plan on the last night of the meeting. According to British and us sources, the plan had been hatched in a lengthy telephone call between us president Bill Clinton and uk prime minister Tony Blair. A small group of us and European delegates worked through the night, reaching tentative agreement the next morning. The text addressed the three issues that had proved the most controversial over the previous days