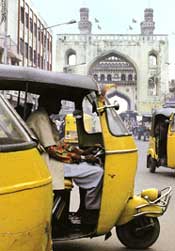 Hyderabad has submitted a wish list worth Rs 20,017 crore to MoUD, under JNNURM. The ministry's central sanctioning and monitoring committee has approved Rs 379 crore and released Rs 33.22 crore as the first instalment.

Hyderabad Urban Agglomeration's (HUA's) population is likely to increase from 5.7 million in 2001 to 7.72 million by 2011 and 10.89 million by 2021, which explains the expensive wish list. According to Hyderabad's CDP: "Urban growth puts heavy pressure on infrastructure and unless infrastructure improves, quality of life suffers.' The problem is that like almost all plans that go to JNNURM, it was prepared and passed with no public consultation or debate.

The Municipal Corporation of Hyderabad (MCH) is expecting huge investments in traffic and transportation, followed by water supply and sewerage, in seven years (2005-2012). It has demanded almost 42 per cent of the total investments for water-related projects.Traffic and urban poverty is expected to get 27 and 23 per cent.

The Hyderabad Metro Water Supply and Sewerage Board (HMWSSB) wants to supply water at the rate of 160 litres per capita daily (lpcd) by 2011 and reduce leakages and pilferages to 30 per cent and 15 per cent by 2011 and 2021. The present rate of water wastage is 40 per cent. As planned earlier, the board will bring water from river Krishna