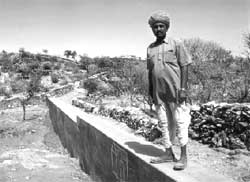 Initially involved in adult education and health activities, Jawan Lal took it as a challenge to transform degraded lands to productive assets in Barwa village for about 110 families. Jawan Lal says, "Even we realised the importance of water and afforestation early, but people were not ready to join and it took us one year to win them over to our way of thinking.' The panchayat, which was reluctant to hand over the degraded lands was persuaded by Jawan Lal. But more problems cropped up when the villagers were misinformed that the land to be developed will be occupied by Seva Mandir. Finally, after a lot of clarifications and meetings the matter was settled. In early 1980s, he played a key role in constructing a check dam in collaboration with the village panchayat. This was followed by the construction of ponds in 1998 and 2000. Jawan Lal is very much interested in extending the watershed management programme to improve the standard of the farming sector in the village. Arranging a separate meeting for women helped in overcoming the attendance problem owing to the purdah system.

Jawan Lal says, "Our women handle their own meetings separately and they have opened their savings account also. Savings have grown up to Rs 2,30,000.' Today, he stands tall amongst other village leaders for his uprightness and dedication.